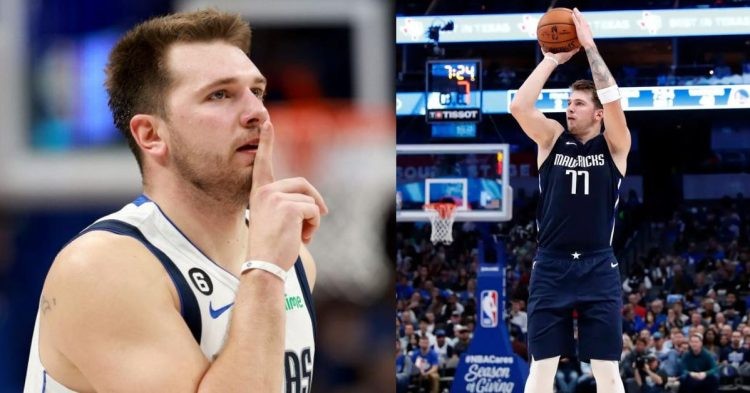 Luka Doncic has already built quite a history with the Los Angeles Clippers in his young career. After all, he has faced them twice in the NBA postseason. Both times, Kawhi Leonard, Paul George, and the Clippers ended up prevailing. Nonetheless, it was undisputed that Doncic was the best player on the court in those series.

He got to face them again in an old rematch. However, as we already know, Kawhi Leonard was not present in this game. As the game reached its climax, Doncic made a shot and followed it up with a celebration. This is actually quite common in the NBA. This celebration caused quite a lot of confusion on social media. NBA fans must want to know more and understand the context of this situation.

Why are people talking about Luka Doncic’s “shush” gesture during Mavericks vs Clippers?

As you could have guessed, the celebration was a “shushing motion”. Despite its simplistic nature, it became quite talked about on social media platforms like Twitter. This is for a very simple reason.

We know the NBA uses a home-and-away court system. Therefore, one team always has the support of an enthusiastic audience. While another feels the pressure of a hostile crowd. Celebrations such as shushing are generally used by the away team to silence an agitated crowd after making a clutch basket.

He got too excited.

He’s telling the other team to shut their mouths!

However, in this case, Doncic was playing at home. As a result, when he hit the shot, the audience exploded into loud cheers. His celebration of silencing them makes no sense in this context. Why would a player want to silence a home crowd enthusiastically supporting his team?

Making a shush gesture doesn’t work when you play at home, Luka Doncic

I was confused too when I saw it😂😂

You were shushing the haters GOAT

To make this matter a bit more amusing, even Luka Doncic revealed that he had no idea why he decided to use that celebration in a home game setting. This has all led NBA fans to question and criticize this celebration. We hope he picks something better next time.