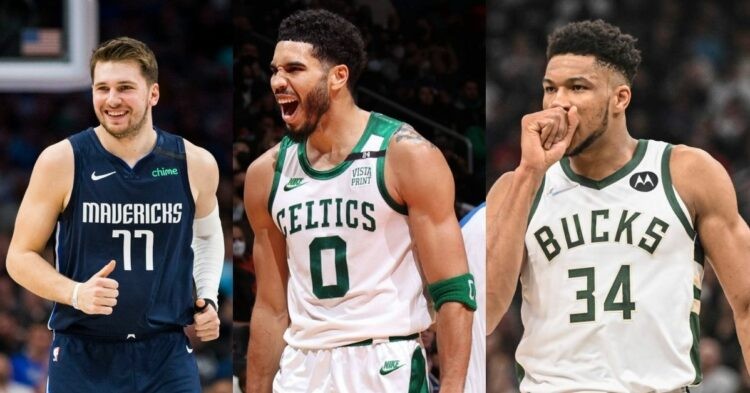 The All-NBA teams are a ranking system every season. It determines the top 3 players in each position. They are categorized into the first, second, and third All-NBA teams. To some, it is a sign of recognition for incredible struggles, while for others it is merely another feather in a cap full of accolades.

The Kia All-NBA First Team is made up entirely of players age 27 or younger for the first time since the 1954-55 season.

The All-NBA teams are made by a global panel of sportswriters and broadcasters. Each is free to have their own opinion when voting for the three teams. However, there are a few similarities they establish to help decide who makes the cut.

How the All-NBA teams only partially make sense

Giannis Antetokoumnpo and Luka Doncic are the easiest no-brainers. They are without a doubt the best guard and forward in the league. Additionally, they are both sole superstars who lead their teams to positive records in the NBA regular season.

Jayson Tatum elevated his game in the second half of this season. The Celtics were in danger of missing the playoffs. However, JT stepped up and helped carry them to the second seed. He was also hugely responsible for eliminating Giannis and KD. This gave him a spot on the first team.

Nikola Jokic managed to collect himself a neat set of accolades over the past few years. He has managed to win back-to-back MVPs and has also made back-to-back first teams. A huge reason for this is the lack of star power on the Denver Nuggets. Their co-star Jamal Murray has been injured this whole season.

Devin Booker won the first All-NBA team. One must wonder whether he deserved it over Ja Morant and Stephen Curry. The only explanation is that Ja was injured for a part of the season and the Grizzlies didn’t falter. Curry and the Warriors got off to a hot start but finished the season as the third seed.

Booker was the best player on the Suns and held the best record despite Cp3’s absence in stretches. The panel must have felt this to be a good enough case to vote him into first place. Or perhaps, Curry and Morant didn’t get enough votes for the aforementioned reasons.

However, one cannot question an alleged democratic style of voting. Booker must have had a better impression of the sportswriters in total compared to his opposition.