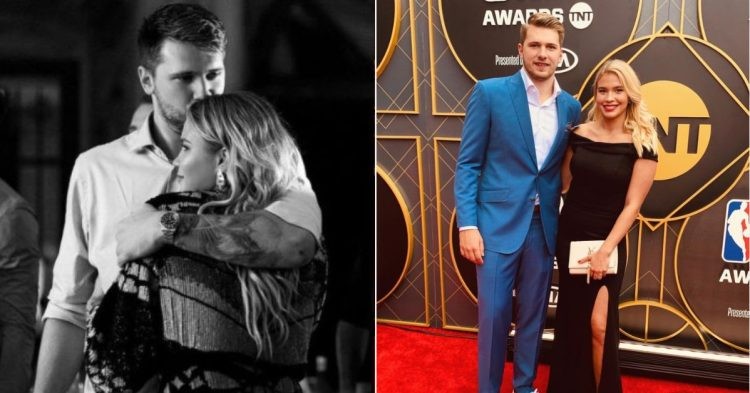 23 years old Luka Doncic of the Dallas Mavericks is proving to be a future star of the NBA alongside players like Trae Young and Klay Thompson. He tasted success at quite a young age and has shown tremendous growth at quite a speed. Apart from his successful professional life, he is currently in a relationship with Anamaria Goltes.

Born and raised in Zagorje ob Savi, Slovenia, Anamaria is a model and fashion influencer. She completed her schooling at the School of Economics and Business at the University of Ljubljana. She has been quite known as an avid fitness enthusiast and often posts fitness videos on social media.

With New Year celebrated all over the world, Luka’s girlfriend Anamaria posted a stunner picture of herself at the tennis court.

Thus, the 25-year-old has been quite active when it comes to being updated daily on social media with her fitness routines.

However, to understand their story let’s take a look back at how did the pair meet.

How did Luka Doncic and Anamaria Goltes meet?

Childhood sweethearts Luka Doncic and Anamaria Goltes at the age of 12 years old met at the seaside in Croatia. According to sources, the two met in 2011 at the time Luka was in Spain for the Real Madrid basketball team. At that time both were quite young.

Officially they started dating in 2016. At the time, Luka was 17 years old and Anamaria was in the US for a project by International Management Group where she met Luka. Following this, they had a brief split in 2018, before Luka’s draft by the Dallas Mavericks in NBA. Later the two got together as they spent quarantine together during the COVID-19 pandemic along with their two dogs. Since then the two have been in a good relationship.

Thus, completing four years of their relationship, the two have been quite supportive of each other’s careers. When Doncic made his record-breaking stats against the Knicks, Anamaria supported him with posts on her Instagram story. Apart from this she often posts pictures wearing Luka’s jersey with their dogs Hugo and Gia as well.