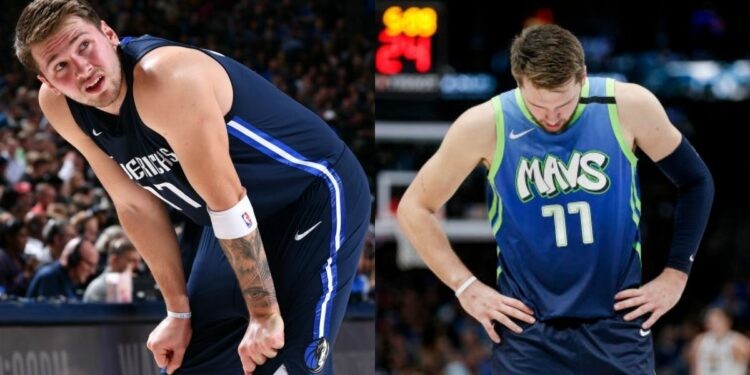 The Dallas Mavericks were undefeated in elimination games this postseason coming into Game 5 of the Western Conference finals. They trailed the Golden State Warriors 3-1 after pulling a game back in Game 4 at the American Airlines Center. The Mavericks owed Luka Doncic much for his performances in all three of their elimination games.

The 3-0 elimination game record would not have been possible without Luka Doncic. The Mavericks first faced elimination against the favorites, Phoenix Suns, in Game 6 of the Western Conference semifinals. Luka Doncic scored 33 points, collected 11 rebounds, and assisted 8 times to force a Game 7 against the Suns.

In Game 7, Doncic doubled up on that performance and scored 35 points playing just the first 3 quarters. He also had 4 assists and 10 rebounds to his name to complete a huge upset in the semifinals. Consequently, the 3-time All-Star led the Mavericks into their first conference finals in over a decade.

The third elimination game of the postseason for the Mavericks was far more desperate. It was not just about elimination, but rather about not being humiliated. They had to win to stave off a sweep by the Warriors on their home court.

Doncic was called in to deliver again, and he did so, admirably. Dropping 30 points, 14 rebounds, and 9 assists to blow out the Warriors and delay their impending knockout.

But it was not going to happen for the Mavericks every time.

Luka Doncic had a woeful first half against the Warriors

Turns out 4th time isn’t the charm. Luka Doncic did not enjoy the best of starts to Game 5 against the Warriors. Having led the series in points scored in both halves, he had a terrible scoring streak in the first half of the game.

Luka Doncic was ice cold in the first half of Game 5 vs. the Warriors ❄️

But the damage was done, and the Mavericks stared down the Chase Center tunnel for one last time this season. It’s the hard way to learn, but Luka Doncic will be back from this. Better than ever.