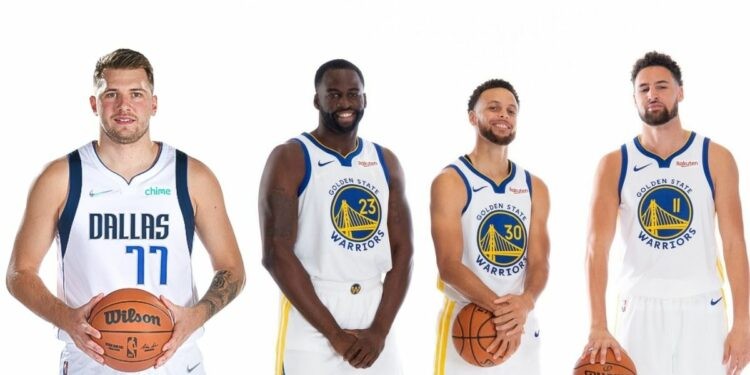 The Western Conference finals between the Dallas Mavericks and Golden State Warriors have been a lopsided affair. The Warriors have dominated the Mavericks and capitalized better than the lower seed. But a Stephen Curry vs Luka Doncic matchup is definitely delivering. Even if the teams do not seem to be evenly matched.

Stephen Curry has not failed to score more than 20 points in all 4 games between the Warriors and the Mavericks. Curry is also shooting at a very efficient 47.9% from the field and 47.1% from behind the arc. His averages of 26 points, 7.5 rebounds, and 7 assists have been key to the Warriors racing ahead to a 3-0 lead in the series.

On the other hand, Luka Doncic might be the foremost reason the Mavericks are not going home after 4 games. He has consistently been the difference in the games where the rest of the Dallas roster fails to get going. Apart from his 20-point, 7-rebound, poor performance in Game 1, Doncic has been unstoppable.

It took the 3-time All-Star a single game to figure out the Warriors’ defensive scheme and he has gotten to work ever since. Except it has not counted for much. Not until Game 4 when the Mavericks faced elimination and a potential humiliating sweep.

Luka Doncic has more free throws than anyone

Doncic pulled out a near triple-double in Game 4 as he dropped 30 points, 14 rebounds, and 9 assists in the Game 4 victory. A game where the Mavs finally pulled one back. Luka leads the series in points made, steals, and rebounds. And he also leads it in one other unusual stat.

Luka Doncic has gotten the most free-throw attempts across the series with 50. He has made 39 of them successfully.

Stephen Curry, Jordan Poole, Klay Thompson, and Andrew Wiggins, the offensive fulcrum of the Warriors have combined attempted 59 free throws. The disparity might point toward officiating bias, which has been a mutual complaint from both teams this series.

But it also denotes just how dependent the Dallas offense is on one man, Doncic. Everything goes through him and naturally, he takes the fall for most of his drives into the paint. Against a defense as stout as the Warriors’, it is not easy to finish at the rim by any means.

Is this series virtually over? Or do the Mavs still stand a chance? Free throws or not, a point is a point and Luka Doncic will take anything he gets in his quest to keep his team alive.