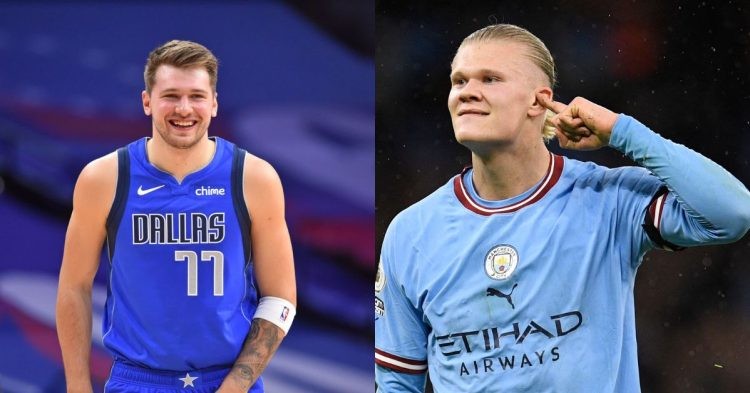 We have witnessed many players come up the ranks in the NBA this season. One player who has broken down the door of expectations would be Dallas Mavericks sensation Luka Doncic. He has managed to impress the entire NBA world with his sensational performances on the court. Doncic has been putting in a shift for the Mavs, just like Manchester City’s Erling Haaland. Fans seem to believe that the sporting stars are not all that different.

For those who might not be familiar with Erling Haaland, as surprising as that sounds, the Norwegian striker joined the Premier League side before the 22/23 season. Since joining The Citizens, he has been the best player in the league without a doubt. It certainly reminds us of someone in the NBA; Luka.

How are Luka Doncic and Erling Haaland similar?

The biggest similarity between the two sporting stars is that they are both very young and of similar age. Haaland is 22 years old and Luka is just 23 as well. Their age shows that they still have a long and bright career ahead of them.

In addition to that, what led fans to believe that they are comparable was their performances for their respective teams. A fan even tweeted once, “Luka doncic like the haaland of basketball” indicating that the Slovenian star might be the basketball regen of Haaland.

is luka doncic like the haaland of basketball or something idgi

Luka Doncic is the basketball version of Erling Haaland.

You guys gonna think I’m crazy, but Luka Doncic is just the NBA version of Erling Haaland. And vice versa

The numbers indicate that Doncic and Haaland are not that different as well. Luka is the leading scorer in the NBA, as of December 5, 2023. He has made 1201 points in 35 games played. That includes a 30-point streak in his last 6 games as well.

On the hand, Man City’s star no.9 has 33 goals in just 27 appearances this season. If that wasn’t enough, Haaland has to net two more goals to reach the count that won Mo Salah and Son Heung-min the EPL Golden Boot last season. He was also the fastest player to hit the 20-goal milestone in the EPL.

Apart from the numbers, the consistency that these two athletes have displayed is surely out of this world. That sums up the tweet from a fan, “I’m convinced that Luka Doncic and Erling Haaland were made in the same lab.” The reaction from fans shows that both Luka and Erling are freaks of nature. Opposition teams have been struggling to stop them, and they aren’t showing signs of taking prisoners as well.