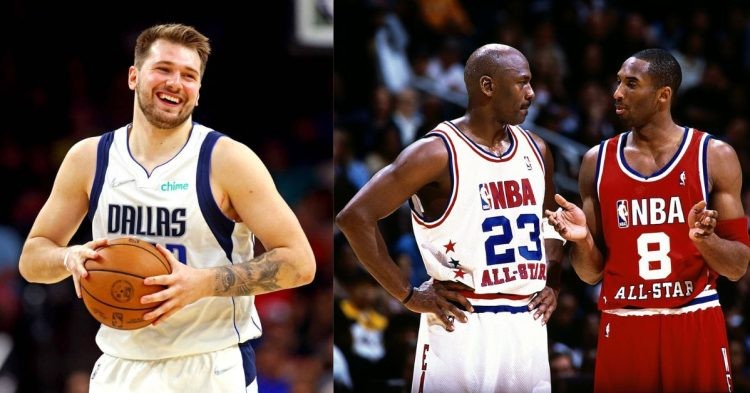 Luka Doncic and Kobe Bryant with Michael Jordan on the court (Credit: Twitter)

As Luka Doncic continues to play at an amazing level, fans have already begun making comparisons to the likes of other NBA legends like Kobe Bryant and Michael Jordan. We all know that both Jordan and Bryant were widely considered the best scorers of their generation. It appears that the same standards are being put on Luka Doncic a few years into his NBA career.

Doncic has already broken a few NBA records and put up numbers that many of us thought were not possible. With that being said, NBA fans must certainly want to know how he compares to Michael Jordan and Kobe Bryant. Especially after his recent 30-point game against the Hawks Additionally, understanding the differences between these players and the era in which they played is also quite important.

This NBA season is only a little more than half done and there is still a lot of basketball left to play. Nonetheless, as fans have already pointed out on social media, Doncic is on pace to have an incredible season. In fact, it can be compared to some of the amazing seasons we have seen in the past by other NBA stars.

As we all know, both Jordan and Bryant were able to lead their time to the NBA Finals multiple times. They also have several championships to back their claims as NBA greats. Therefore, putting up such elite numbers could hurt Luka. Especially if he does not manage to win an NBA title over the next few years.


Some fans also pointed out that the season is not over and that Doncic’s numbers could very well drop down. This is certainly possible if he gets injured or goes through any other unforeseen circumstances. In any case, Doncic now has all the more pressure due to these comparisons. Hopefully, he will be able to live up to them.