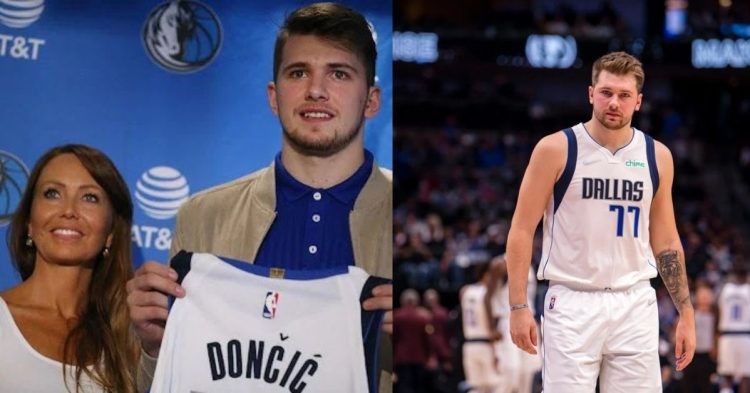 Luka Doncic is considered a bright future star and a potential face of the NBA one day. He has been in the league since 2018 and has proven himself to be a force to reckon with. Doncic managed to carry his team to the Western Conference Finals this year.

While the Mavs star certainly wins on the basketball court, his latest battle in the legal courts will prove to be quite a challenge. To those who do not know, Luka is currently in a legal battle with his mother Mirjam Poterbin. This is quite an odd and peculiar situation. After all, how serious could this issue be that it requires legal proceedings and decisions? One should want to know all about the dispute between Doncic and his mother.

Luka can be considered a global athlete and has recently shown interest to want to pursue his business decisions independently. Unfortunately for him, his mother owns the rights to his earlier trademark “Luka Doncic 7“. NBA fans who knew Luka prior to joining the league, know that was his jersey number during his time with Real Madrid playing in the Euro League. Initially, that was the number he wore and since he was a minor at the time, Mirjam had to control the rights to his patented trademark.

Luka Doncic is in a legal battle with his
mom, she won’t give up
his trademark “LUKA DONCIC 7” and he can’t start his own trademark because
she won’t give him rights to his name. pic.twitter.com/gEdrgEa8Ud

Now that Luka is wearing a different number, is a grown adult, and living his own life, he tried to file for a trademark “Luka Doncic 77”. However, since both trademarks have a heavy overlap, the examiner believes that this would cause consumer confusion and reduce the value of both trademarks.

This is certainly a valid point. Be that as it may, Doncic’s case is based on the fact his mother never used the logo in the United States and has no further interest or association with it. Moreover, Luka himself claims to have no connection to his previous trademark in the present situation.

Luka Doncic and his Mom are in a legal battle for control of his trademarks.

In September, Luka filed to cancel a trademark his Mom owns for “LUKA DONCIC 7.”

Last week, his Mom fired back, seeking to dismiss the legal proceeding on technical grounds.

Mirjam did not take this quietly. She filed a motion to dismiss her son’s claims. Additionally, she also stated that he gave written consent that she would be his long-term handler for his trademark.

In any case, this is going to hinder Luka’s ability to expand and control his potential business empire himself. Hopefully, he and his mother are able to come to an understanding in the near future.