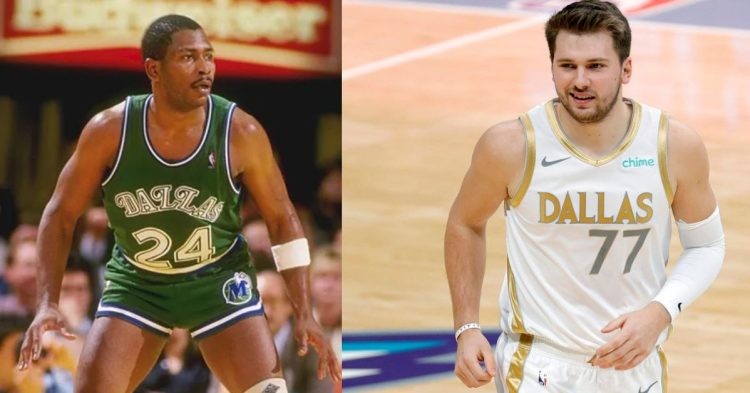 Luka Doncic and Mark Aguirre on the court (Credit: Twitter)

Luka Doncic might just end up breaking a record previously held by former NBA star Mark Aguirre. As most of us are already aware, Doncic has been playing at an incredible level and has already displayed multiple high-scoring games in the first half of this NBA season. He has already broken multiple records and made NBA history so far. However, he might just end up breaking yet another if he keeps up this elite level of play.

Not many modern-day NBA fans will remember Mark Aguirre. He played in the NBA for 14 seasons from 1981-82 to the 1993-94 season and is best known for his time with the Dallas Mavericks. Considering that he is not a player from this era, fans must certainly want to know what record he holds, how close Luka Doncic is, and whether it will actually come to fruition.

How many points does Luka Doncic have this season?

Mark Aguirre was certainly a good player back in his era. He averaged 20 points, 5.1 rebounds, and 3.1 assists throughout his career. During his best season with the Dallas Mavericks, he managed to score an impressive 2,330 points in the 1983-834 NBA season, averaging 29.5 points a game. This led to him becoming the franchise leader for most points scored in a single season.


As already mentioned, Luka Doncic is playing incredibly well this season. He is averaging 33.8 points, 9 rebounds, and 8.8 assists. Offensively speaking, these are the best numbers he has put up in his career so far. His rebounding and assisting ability also seem to be better than that of Aguirre.

We are only halfway into the NBA season and there is a lot of basketball left to play. Nonetheless, we shouldn’t deny the fact that Doncic is on the verge of breaking Mark Aguirre’s single-season most points scored record. Mark scored 2,330 points during a season where he played 79 regular season games for the Mavs.

According to the statistics, Luka Doncic has already accumulated 1351 points in the 40 games he has played so far. That means he is more than halfway there when it comes to breaking this record. Considering the love and popularity that Doncic is receiving from the Dallas Mavericks for his play, it is difficult to discredit his chances of catching up to Mark Aguirre and seizing this record for himself this season.


However, it is quite unfair to assume that Doncic will most certainly get this record. After all, issues like health and injury management might just keep him away from a few games. Nonetheless, if he does play and remains relatively healthy for the rest of this season, we expect him to have this record at the end of it.