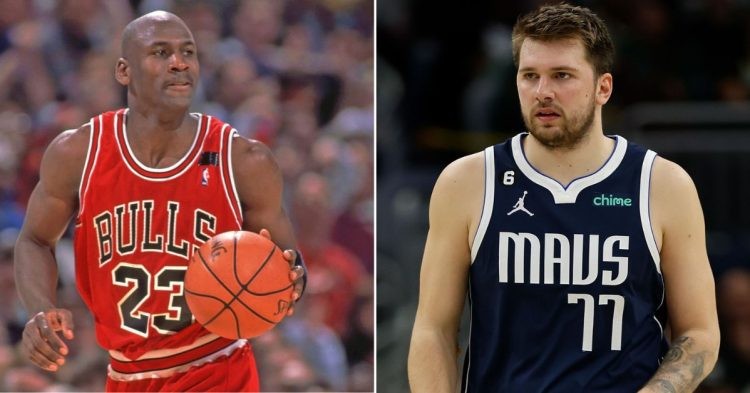 Michael Jordan and Luka Doncic on the court (Credit: Twitter)

Heading into the New Year and the second half of the 2022-2023 NBA season, Luka Doncic appears to be one of the best players in the league. His New Year gift to all basketball fans has been an elite level of play over the past few games. Doncic has been putting up unreal numbers and carrying the Dallas Mavericks to a better position in the Western Conference with 21 wins and 16 losses, giving them the 4th seed.

Fans have already heard about the comparison between LeBron James and Luka Doncic. Luka’s scoring and ability to dominate the league at a young age have now earned comparisons between him and Michael Jordan. Considering that both of them dominated the league during different eras, the statistics might not be all that accurate.

Luka Doncic is averaging 32.8 points, 8.3 rebounds, and 8.7 assists after finishing with 50-8-10 against the Rockets. If he stays above the 32-8-8 threshold on the season, he will join Michael Jordan as the only NBA players ever to do so in a single-season. pic.twitter.com/ovNGQLlGj1

Nonetheless, fans are convinced that Luka Doncic and Michael Jordan were not that far apart in terms of statistics during this juncture in their respective careers.

Luka Doncic is the next Michael Jordan

Micahel Jordan was a generational athlete and talent, one who revolutionized a league that he played in. What made MJ special was the fact that his basketball IQ and playstyle simply looked more developed and refined in comparison to his contemporary players.

The same can also be said about Luka Doncic. He has been the focal point in the Dallas Mavericks offense. Additionally, Doncic is listed as a slightly taller and heavier player when put in contrast with Jordan. Fans congratulated and praised Luka Doncic for the beginning of 2023, “Luka Doncic is the best player in the NBA. Happy New Year #LoneStarNYE.”

Luka Doncic is the best player in the NBA. Happy New Year #LoneStarNYE

Only 8 players in NBA history have dropped 3 or more 50+ point games in a season before the age of 25:

Luka’s scoring over the past 5 games has put him among the distinguished company. He is only the 5th player in modern league history to score more than 225 points in a 5 game span. Doncic had 228. Additionally, the others on this list include Damian Lillard, Kobe Bryant, Michael Jordan, and James Harden. Therefore, it is fair to say Doncic is playing at a truly elite level.

Luka Doncic joins Damian Lillard, James Harden, Kobe Bryant, and Michael Jordan as the only players in the modern era to score 225 points or more in a 5 game span (Luka scored 228) pic.twitter.com/0rzVFfi8wi

Luka Doncic had his third 50-point game of the season last night in 2022. That’s the most in a single season by a player aged 25 or younger since Lebron James had 3 in 2009.

Luka doesn’t turn 24 until the end of February.

Luka Doncic’s 5-game streak has never been done before, not even by LeBron James or Michael Jordan. WOW 😤https://t.co/Wpf9Wm07oq

His stats look as good as Michael Jordan’s when they are compared. As NBA fans have pointed out, Jordan averaged 37.4 points 5.4 rebounds, and 3.8 assists. Additionally, he shot 47.4% from the field and 20% from the three-point line, when he was 23 years old. However, these statistics only apply for the first half of the season, up until New Year.

Diffrent era blah blah blah, I get it. But still Luka 🐐

What is Luka Doncic doing 😭. Please pity us
Man is going for 80 points against us. It’s the New Year bro

Luka is more efficient, and a significantly better rebounder and passer compared to MJ. Therefore, some fans have indicated their preference for Doncic over Michael Jordan.