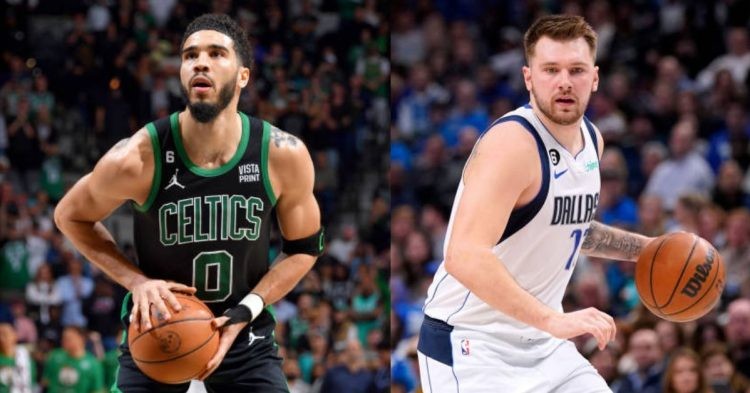 Passing NBA legends like Michael Jordan, LeBron James, and Kobe Bryant, new generation players like Luka Doncic and Jayson Tatum are now ready to take over. Following their impressive growth they seem to be dominating the gameplay of the 80s and 90s NBA players. They are making history at such a young age that was not made by the past players. However, if they continue to improve at such a pace, they can become the future stars of the NBA.

While talking about Dallas Mavericks shooting guard Luka Doncic’s NBA career, the 23-year-old statistics are quite impressive. In his 20s he averaged 28 points, 9 rebounds, and 8 assists. Next, in the 2022 season, he made 33.5 points, 9.1 rebounds, and 8.1 assists per game. Following this, his 60 points against the Knicks are considered to be the greatest in NBA history.

Thus, alongside Oscar Robertson and LeBron James, he is the only player to make 26.0 points, 8.0 rebounds, and 8.0 assists in a single season. While the one hand we have Mavericks star Luka Doncic, on the other hand, we have Boston Celtics star, Jayson Tatum. His 60 points against the Spurs is one of the youngest player records in the history of the NBA. Along with this, he tied Larry Bird’s franchise record for the most points in a single game.

With players creating history in their current NBA career debates have started all over discussing which candidate holds the highest MVP ranking. According to sources, in the 2nd position is Celtics player Jayson Tatum. His season statistics include 31.0 points, 8.1 rebounds, and 4.0 assists. Apart from this, he passed Antoine Walker for the second-most made 3-pointers in Celtics history.

Next, at the third position is Mavericks player Luka Doncic. His season statistics include 33.7 points, 8.8 rebounds, and 8.9 assists. Following this, his consecutive 50 and 60 points, made him the first player in NBA with 250 points, 50 rebounds, and 50 assists over a five-game span. Thus, with Doncic’s dominant gameplay, he has led the Mavericks to No. 5 in the Western Conference.

However, with a league consisting of such rich talents and standout performances, it is hard to consider who stands at the top rank of MVP. Despite the rankings, it will be quite interesting to see the performances of emerging players like Luka and Jayson.