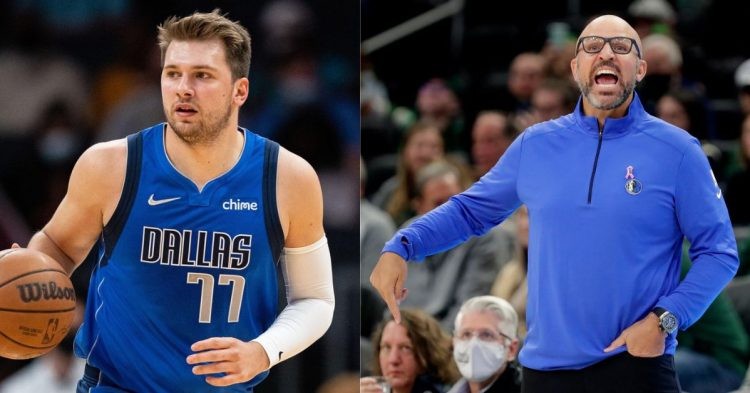 Luka Doncic and the Dallas Mavericks faced up against the Boston Celtics on Thursday, where they were blown out 95-124 by the Celtics behind a 29-point triple-double by Jayson Tatum. The highly anticipated matchup between Tatum and Doncic seemed to have gone in Tatum’s favor as Luka managed to put up only 23 points and 3 assists, shooting 7/23 from the field.

something not right with Luka Doncic playing on a hurt ankle, also grabbing at his chest pic.twitter.com/x67lW1wDjS

However, there might be a reason for this. On multiple occasions during the game, Luka was seen visibly struggling with his health, coughing uncontrollably, and even grabbing his chest at one point. The coughing persisted till the end as Luka headed to the locker room.

Does Luka Doncic have COVID-19?

One might be quick to point out that the constant coughing and chest grabbing could be potential signs of COVID-19. That could actually be the case as the recent arrival of a new variant has resulted in another surge of cases in the US.

The NBA has also found a few of its players entering its Health & Safety Protocols again. While there is no official word from the team about Luka’s status yet, the possibility is very real.

Do the Mavs have a Plan B?

If Luka does test positive for COVID-19, he could end up being sidelined for more than 2 weeks, which is a lot of time for a team that heavily depends on its superstar point guard to perform night in and night out. The Mavs have a visible lack of depth at the point guard position, with veteran Kemba Walker, who hasn’t played as many games this year, being the only other reliable option as Dinwiddie occupies the two-guard spot.

Hearing Mavs‘ head coach Jason Kidd certainly leaves the impression that they don’t have a plan B yet. When asked about Luka’s struggles in the post-game presser, Kidd seemed to downplay it, but was particularly clueless about his health, stating “I don’t know about his health. I know he did leave at one point, but I don’t know what the cause of that was.”

When asked about Luka Doncic’s health, Jason Kidd: “He looked like himself out there. He just missed some shots. He had some good looks. They just didn’t go down. I don’t know about his health. I know he did leave at one point, but I don’t know what the cause of that was.” pic.twitter.com/ZUaspF4IoW

While we, as well as all of Luka’s fans and his teammates certainly hope that this was just a minor inconvenience, if he does turn out to be infected with the virus, Kidd and the Mavs would need to get back to the drawing board, take out their depth chart and take a good long thought for the upcoming weeks as they look to improve on their 22-17 record in the competitive Western Conference.