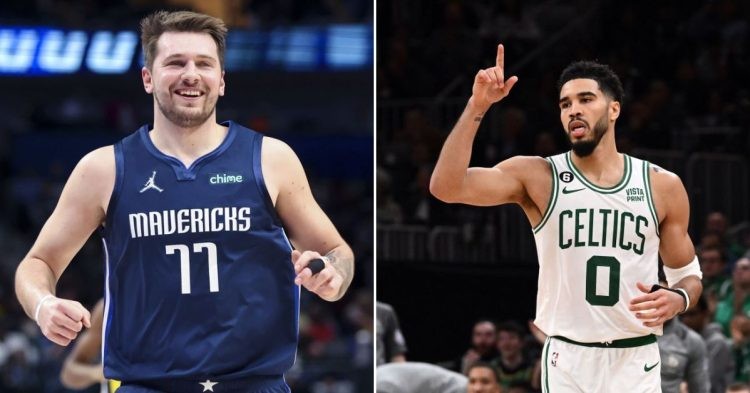 Luka Doncic has been on fire so far in the 2022-23 NBA season. He has managed to turn all his haters into his fans after displaying phenomenal numbers on the court. One of the biggest feats he has achieved this season would be averaging more points than the great Michael Jordan in his fifth year. He is obviously still not at the end of the season, but we can expect Luka to finish strong as well.

With that said, the NBA world has compared Doncic’s numbers to 4x NBA champ LeBron James as well. He averaged more points than The King too! Although it was no secret that LeBron did not play as many games, it is still an extraordinary achievement from Luka. With that said, let’s compare his numbers to one of the best young players in the league; Jayson Tatum.

How does Luka Doncic fare against Jayson Tatum?

Until the end of 2022, both Tatum and Luka played 34 games during the 2022-23 NBA season. In this time, the Celtics star has put up 1055 points, 277 rebounds, and 137 assists as totals. The averages would be 31 PPG, 8.1 RPG, and 4 APG. It is quite evident that Tatum is surely deserving of the praise as the NBA world hails him as one of the best players in the league. Some even shout him out to be the MVP this season.

Luka’s stats might convince them otherwise, however. He made 1257 points, 296 rebounds, and 302 assists in those 34 games until the end of 2022. That should mean the Dallas Mavericks guard put up 36.9 PPG, 8.7 RPG, and 8.8 APG. Despite what many may claim, Luka has surely been the better player in terms of numbers. Together with that, he has been leading the Mavs, almost single-handedly at times.

The pair went head-to-head recently as well. The Celtics took the win thanks to a triple-double from Jayson. It might lead fans to believe that Tatum has been better than Luka this season but that doesn’t look like it. If we’re being honest, the Celtics are a slightly better team than the Mavs this season. The Texas-based franchise is still in the market for a partner for Luka at the backcourt.

JT has the likes of Jaylen Brown and Marcus Smart to help him lead the Celtics. With that said, Luka has been performing better on a decent team. Make no mistake, Tatum has been doing a tremendous job for the Celtics so far. They sit at the top of the Eastern Conference and look to be one of the contenders this season as well. We will have to wait to see how the Mavs perform this season under Luka’s leadership.