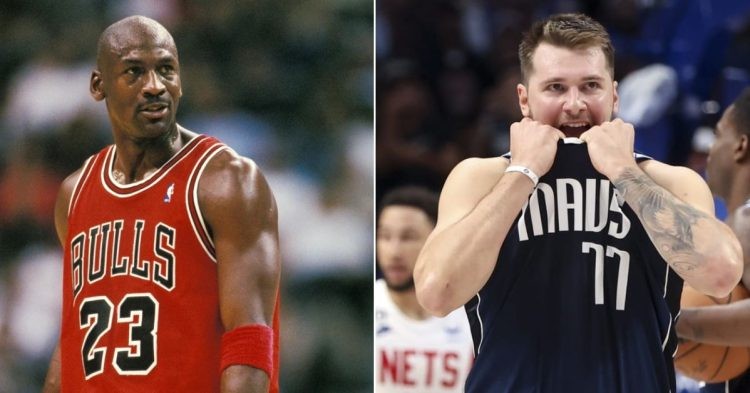 Luka Doncic and the Dallas Mavericks have had a decent start to their season with a record of 6 wins and 4 losses. Throughout this stretch, Luka has been phenomenal for the Mavericks. He has been putting up averages of 34.8 points, 8.2 rebounds, and 8.1 assists per game.

Luka is putting up MJ numbers to start the season 😯

The last time we saw a player start their season off like this was back in the 1986-87 season when the GOAT Michael Jordan himself did it. Luka is doing some magical things this season. The Luka league takeover might finally be in play after all this time.

Can Luka Doncic become the MVP?

Luka for sure has the numbers to win the MVP, but what he doesn’t have right now are the Wins. Let’s have a look at the ridiculous things that he has been doing this season.

Sure Luka’s team is doing well compared to most of the league, but there is one player who is still ahead of Luka in the MVP race. Giannis Antetokounmpo has also been putting up amazing numbers this season with averages of 31.8 points, 12.2 rebounds, and 5.3 assists per game.

He has also led his team toward the best record in the league with 9 wins and 1 loss. If anyone’s gonna win MVP it’ll be one of these 2. Though there are a couple more players like Stephen Curry and Ja Morant who can turn their season around and come out on top.

Who will win this year’s NBA MVP?

With players like Luka and Giannis going off game after game, the league has had an air of excitement around it. Along with them, there are others like Donovan Mitchell and Jayson Tatum who have been making their own cases for winning MVP. The league has been blown wide open and the race for MVP this season is going to be one for the ages.