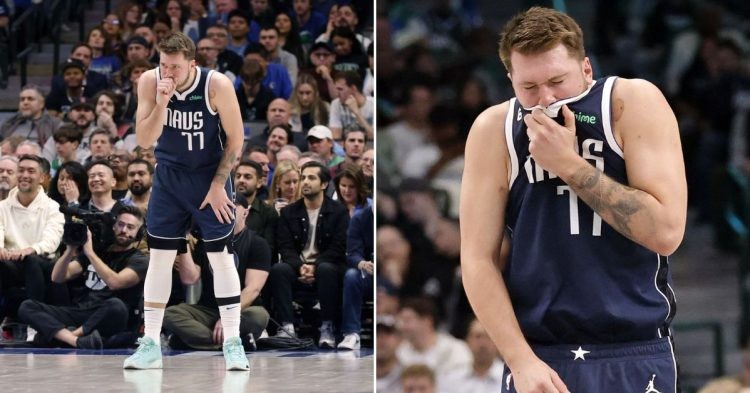 The Dallas Mavericks faced the Boston Celtics at the American Airlines Center last night. Unfortunately for Jason Kidd‘s side, the Mavs lost 95-124 to last year’s finalists. Jayson Tatum was the standout performer for the Celtics. He walked off the court with a triple-double against Luka Doncic-led Mavs after putting up 29 points, 14 rebounds, and 10 assists on the night.

The NBA world expected Luka to have yet another incredible performance last night. That wouldn’t be a huge surprise considering how he has played in the last few games. The Slovenian has put in an absolute shift for the Texas-based franchise this season. In the last 10 games, Doncic has had only two games where he made less than 20 points. It certainly looks like he might be overworked, which has caused concerns for fans about his health.

Will the Dallas Mavericks miss Luka Doncic due to COVID-19 again?

For those who don’t know, Luka tested positive for the deadly disease in 2021. He missed several games late that year and his absence from the Mavs roster was quite visible. Could that be the case once again? Recently, when he played against the Celtics, Doncic surely looked to be uncomfortable. Fans pointed out that he was coughing repeatedly and appeared as if he wasn’t feeling too well.

Something is wrong with Luka Doncic. He’s coughing and generally looks unwell.

Hard to watch, he clearly is being pushed to hard by the mavs

Luka out there coughing the new COVID all over the floor and chucking up mad bullshit. Just pack it up, J. Kidd.

Luka is very obviously sick. He’s coughing. He’s pulling at his chest. What are we doing here.

Luka Doncic looks like he might be sick. He was holding his chest and coughing. Now bent over with his face in his jersey. Doesn’t look great at all.

Mavs fans are understandably worried about their star player. It is no secret that Luka has stepped up for the franchise in almost every game. And if he is not feeling well, the fans’ hopes will surely be up in flames. The fact that the Mavs guard is the leader in points scored, assists, rebounds, and blocks made on the roster show how hard he has been working.

Luka Doncic is FAKING IT. Just because they losing. When he scores he’s fine, he he can’t stop anyone on defense he’s “coughing” and “has chest pain”… GTFOH

Another fan also claimed that Luka was only exaggerating his sickness when he was supposed to defend. The user claimed that the Slovenian appeared fine when the Mavs were on the attack. Luka’s fans might believe it to be an exaggeration, however, especially since he has been quite decent in terms of defending.

We have had no official confirmation on Luka’s health, as Mavs coach Jason Kidd seems to be unaware as well. There have been claims that he might have hit his chest and that was the reason for his discomfort. NBA fans would have to wait for an official report from the Mavs soon.