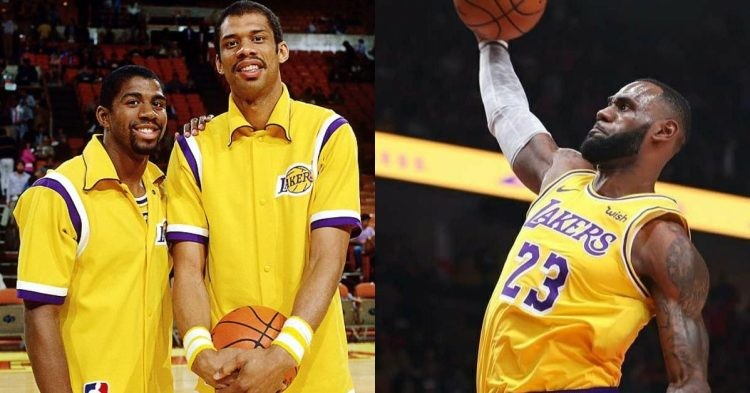 We are reaching a point where we get to witness greatness in front of our eyes. The all-time leading scorer record became Kareem Abdul-Jabbar’s back in 1984. And this year, it may well be taken by the one and only LeBron James. The LA Lakers star is reaching closer and closer to breaking Kareem’s record as time passes.

A while ago, LeBron was asked about his feelings and relationship with Abdul-Jabbar as the entire world expects King James to break the record. He got brutally honest and mentioned, “No thoughts and no relationship.” It prompted the NBA world to think that there was a rift between the two NBA greats. Recently, another NBA legend, Magic Johnson added some fuel to the fire that was burning.

On Club Shay Shay with Shannon Sharpe, Magic said, “I don’t think well. We gotta be honest. And the fact that it’s a dude playing for the Lakers. It’s a dude playing in LA. I think it’ll be a hard pill to swallow… I think he thought was going to have it forever.”

.@MagicJohnson reacts to LeBron James being on the verge of passing Kareem Abdul-Jabbar as the All-Time Leading Scorer:

“If I got to be honest, Kareem isn’t going to handle it well…And it’s a dude that’s playing for the Lakers.” pic.twitter.com/o0xzAjGdYw

Both these players are two of the greatest athletes to feature in the NBA. As Magic claimed, we will see any other players like James and Abdul-Jabbar. The reason for that would be their unmatched work rate and consistency.

LeBron currently has 37,217 points and Kareem boasts 38,387 points to his name. To put that into perspective, King James has to score 1,170 points this season to make the record his own. The LA Lakers star is currently averaging 25.8 points in the 2022-23 NBA season. To beat Kareem, he would have to continue the same scoring average for 46 games this season.