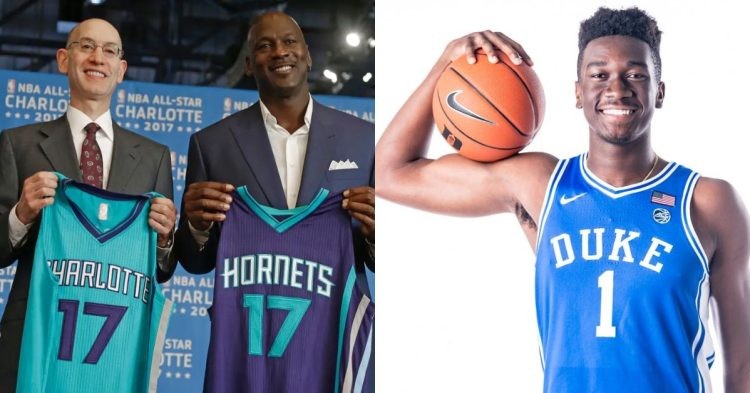 The NBA draft is the night that dreams come true and franchises turn around. It’s when a team can start building for the future despite their standings during the season. Teams that miss the playoffs benefit the most from this but sometimes gems can even appear down the order. Michael Jordan thinks he’s found his gem in the 2022 NBA draft.

Michael Jordan was raised in Wilmington, North Carolina, and played for the Tar Heels before making the NBA. After an illustrious career with a horrific ending, Jordan bought the Charlotte Hornets, his hometown team. He paid $275 Million back in 2010 for the franchise that lacked success. However, almost a decade after the purchase, he has been able to change the direction in which the team is going.

The Charlotte Hornets had 2 first-round picks. One of which was the 13th pick and one of them was the 15th pick. However, after drafting Jalen Duren, they instantly traded him away to the Knicks for 5 future picks. Then they filled the big-man role they had by drafting Mark Williams 15th overall.

Williams was predicted to be a late lottery of mid-first-round pick and was picked up exactly there. His biggest strength, according to most draft reports, is his defense. Mark Williams won the 2021-22 ACC defensive player of the year. He also made the all-ACC, all-ACC tourney, and the NCAA all-region team during his stint at Duke.

He averaged 11 points, 3 blocks and 7 rebounds in 39 games played. The Charlotte Hornets were 23rd out of 30 teams last year in defensive efficiency rating and Williams fills that gap instantly.

“Well, I’m looking forward to it, man. I hope you’re, you’ll get in the gym and start working on your game and make a difference. And even though you’re a Dukie, I take pride in that we did draft you.”

Michael Jordan on the phone with Mark Williams after the Hornets drafted him. ✊🐐

Michael Jordan was really happy with his selection and had to let him know over a phone call. Getting personal praise from the greatest player in NBA history is a luxury only some people can afford. How many seasons will it take for Mark Williams to make his first all-defensive team selection in the league?

“I Don’t Have Any Thoughts,”- Serena Williams Avoids Question on Wimbledon Ban of Russian and Belarus Players