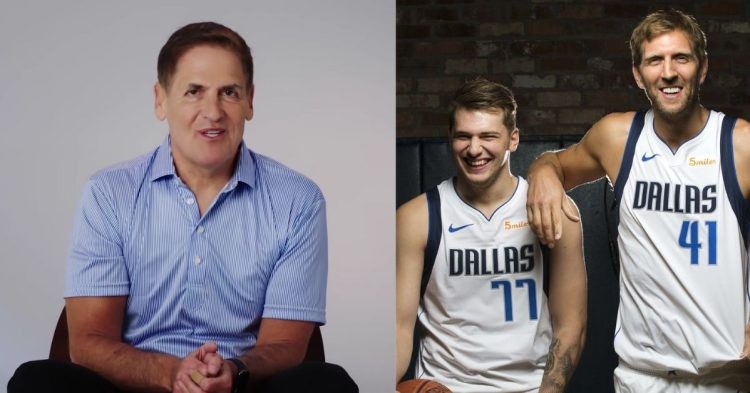 Mark Cuban in a GQ interview and Luka Doncic and Dirk Nowitzki during a photoshoot (Credit: YouTube)

Mark Cuban is the owner of the Dallas Mavericks and one of the most successful businessmen of this generation. He is better known as one of the sharks on Shark tank, an entrepreneur-based TV Show. We all know that Cuban has a net worth well exceeding a billion dollars. Be that as it may, not many people know how he amassed his wealth and multiplied it.

There are thousands of people in the world who are millionaires. However, not all of them do or have what it takes to become a billionaire. It takes a certain kind of mentality and hustle to stay hungry and to want more, financially speaking. NBA superstar LeBron James is the only one to cross the billion mark when still playing.

Cuban recently revealed how he turned just 5 million into his first billion. One should be curious as to how this occurred and if the Dallas Mavericks franchise played a significant role.

As already mentioned, not everyone knows what it takes to become incredibly successful and wealthy. Cuban shared that he never viewed value in terms of money. Instead, he equated it to time. In an interview with GQ sports, he revealed what made him catapult his net worth greatly. Amusingly enough, that had a lot to do with basketball, the sport we all love and are interested in.

“We set up this website called audionet. The next thing you know video comes along and we turned it into a company called broadcast.com. So we started what turned out to be the very first streaming company.

Cuban revealed how his company stock value tripled and he raised his net worth to $300 million dollars. Largely because Yahoo decided to buy it from him and his friend and paid thrice the price for it. Using this money Cuban bought a G5 jet. Additionally, he also bought the Mavs for $285 million at the time.

“I paid $285 million for the Dallas Mavericks. I went to the opening night of the 99-2000 season. First game of the year! Wasn’t sold out, energy wasn’t in the building. I’m a season ticket holder, a huge Mavs fan. I look around thinking I could do a better job than this…”

Mark went on to explain how he raised the Mavericks’ net worth himself, “I put a phonebook and a computer print out of all our customers on the desk and began dialing trying to sell the Mavericks. Mam, I know you been to a Mavericks game before. But, you realize its less expensive to take your kids to a Mavericks game than to McDonald’s… Why don’t you come try us out the first game is on me.”

Thus, Cuban used his excellent business skills to get seats filled in the Mavs arena. He eventually moved the team to a better one and things looked much better for them. After the drafting of Luka Doncic, the Mavericks franchise is worth $2.7 billion today. An incredible hike from the $285 million that he bought it at.