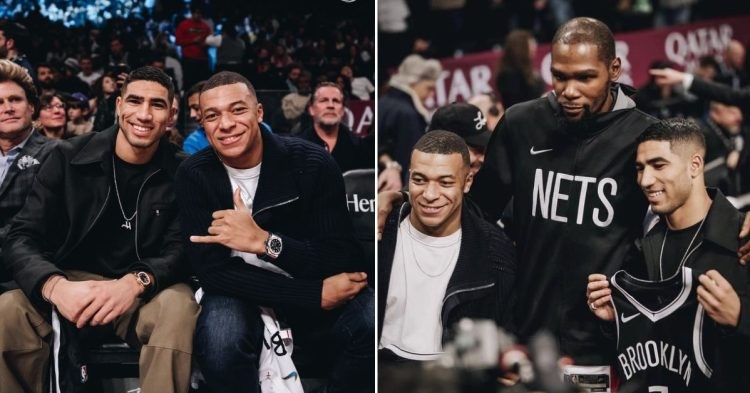 Kylian Mbappe’s name has been on everyone’s lips ever since the FIFA World Cup 2022 began in Qatar. He took the world by storm after bagging a sensational hat trick in the final against Lionel Messi’s Argentina as well. He almost broke the heart of millions around the world. Similarly, it looks like he has broken the hearts of LeBron James’ fans after going to a Brooklyn Nets game very recently.

The Nets faced the San Antonio Spurs at the Barclays Center in yet another classic game night. Kevin Durant and Kyrie Irving were the standout performers as usual after putting up 25 and 27 points respectively. With this win, the Nets stretched their phenomenal winning streak to 12 games. And what made the night more memorable was when soccer star Kylian Mbappe was in attendance as well, along with Achraf Hakimi.

This was when LeBron James‘ fans were left speechless seeing the PSG forward visit KD. They took to Twitter to express their opinions.

Is Kylian Mbappe a fan of LeBron James?

The French international seemed like he was a huge fan of 4x NBA champ LeBron James. Three years ago, he picked LeBron over KD in an interview with ESPN.

.@KMbappe is all of us watching KD get buckets pic.twitter.com/wx3x2YdYtf

Fans have taken Mbappe‘s attendance at the Barclays Center out of context and have mentioned that he chose to watch KD play instead of LeBron. When he watched KD make a bucket so effortlessly, Mbappe had a priceless reaction on the sidelines. This attracted responses from fans as well.

Notice how he went to watch KD and not LeOld

While some have claimed that the 2018 World Cup winner recognizes greatness, some fans seem to be unhappy that he didn’t travel to watch LeBron play. However, it looks like Mbappe was just there to witness some good basketball plays. Just like him, KD has also been in exceptional form in recent games. In the last 12 games that the Nets have won, Durant has averaged 29.0 points, 7.0 rebounds, and 5.6 assists.

The Nets star will be aiming to keep up this form while helping the team take the win. On the other hand, Mbappe will aim to return to Paris and help PSG get back to winning ways after they suffered a defeat for the first time in Ligue 1 this season against Lens.