Meyers Leonard Anti-Sematic Slur: Was the Punishment by the NBA Justified?

The Miami Heat centre/forward Meyers Leonard faced the wrath of fans and the NBA community for using an anti-semitic slur during a stream. As a result, he was fined by the NBA and saw several other bans coming towards him. Although a $50k fine is irrelevant for someone with the multi-million dollar contract, was it justified?

Meyers Leonard will also be required to participate in a cultural diversity program, the NBA says. Leonard used an anti-Semitic slur on Monday during a video game livestream. https://t.co/eHBYNBZz1w

People in general are known to say regretful things while playing video games. Normal people get away with being brutally racist and homophobic on the internet. While it’s true that with great power comes great responsibility, no one has control over the things they say in frustration. This in no way is an excuse for what he said, however, it should not be taken out of context and be blown out of proportion.

He is already being punished by the NBA for his words but it should not be held against him throughout his playing career. He has received a fined as well as a 1-week suspension which is ultimately a liability for the team rather than the player. In addition, he has been banned by Twitch and dropped by Scuf and OriginPC. If twitch is taking action against Meyers Leonard for his words, it needs to maintain uniformity and ban everyone who behaves that way.

Twitch will lose more than half of its users if it treats everyone with the same standards which is unfair to Meyers Leonard. Some fans believed that NBA reacted unnecessarily harsh while some supported the decision. NBA players and analysts on the other hand had mixed reactions. 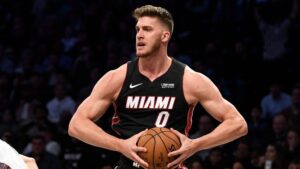 The NBA in TNT crew had diverse opinions about what went down. Charles Barkley believed it wasn’t Leonard’s fault as he is facing the wrath for being popular and Shaquille O’Neal seconded his opinion. However, Barkley blamed everything on ‘cancel culture’ and didn’t seem to address the real problem, which is Meyers Leonard’s ignorance.

He went on a completely different trajectory with arguments like ‘players these days are watched 24/7 while older players could get away with it”. Shaq however believed that the players need to lead by example and be mindful of the things they say. Otherwise, they contribute to the ignorance Meyers Leonard propagated with those anti-semitic comments.

Kenny Smith made the most sense in this discussion and pointed out that his ignorance is also the reason why he chose to stand during the national anthem instead of supporting his teammate. Although players are free to do what they feel is right, Leonard’s reason for not kneeling was exactly what black athletes said they didn’t intend to offend. His brother is a marine and he wanted to respect the forces and chose to stand during the anthem which feeds to the Idea that players who knelt were somehow disrespecting it. This ignorance led to Colin Kaepernick’s suspension from the NFL and several other players.

Meyers Leonard ultimately issued a statement to address his action and apologised to the Jewish community for his ignorant remarks. Heat teammate Udonis Haslem and Head Coach Eric Spoelstra condemned him for his actions as well.