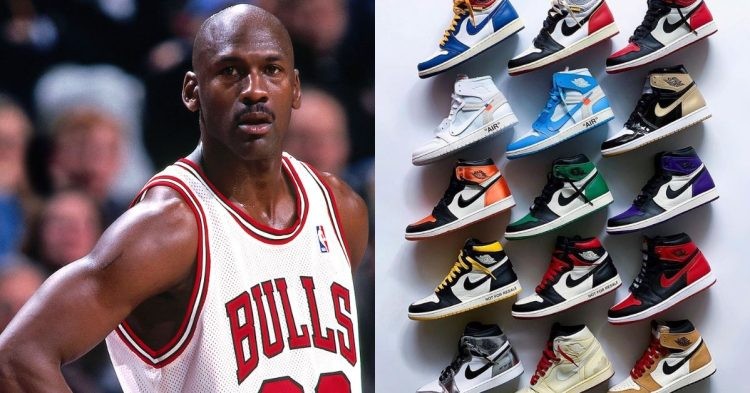 Michael Jordan is widely renowned as one of the greatest basketball players of all time. He turned the Chicago Bulls into a dynasty and won 6 NBA titles with them in his career. Moreover, he has been undefeated in the finals and has never even faced an elimination Game 7.

Jordan also created his own shoe brand “Air Jordan” and revolutionized the business side of the NBA. Reports indicate that he wore the same shoes to each NBA Finals trip and gave away a shoe each time. It is important to know the significance behind these shoes and where they will be displayed to make the “Dynasty collection”.

There have been several great players in the NBA. Some of them even started their own shoe line or brand at a point in their careers. MJ initially signed with Nike in 1984. He helped orchestrate the release of a new sneaker called Air Jordan. This new brand did extremely well due to Jordan’s popularity at the time. Moreover, it generated more than $100 million through sales within the first year. In current times, the Jordan shoe brand is estimated to be more than a whopping $3 billion.

It is a well-known fact that Michael won 6 NBA championships with the Chicago Bulls. His decade of absolute dominance was in the 1990s. The Bulls initially three-peated in 1991, 1992, and 1993. They first defeated Magic Johnson and the Los Angeles Lakers in just 5 games. The following year, Clyde Drexler and the Portland Trail Blazers met the Bulls in the NBA Finals but were soon defeated in 6. Jordan faced off against Charles Barkley and the Phoenix Suns with the hopes of winning three titles in a row and managed to do just that.

His Airness soon temporarily retired from basketball in order to try his hand at baseball. However, he returned two seasons later and helped the Bulls win 3 more titles. They defeated the Seattle Supersonics in 1996. Additionally, they beat the Utah Jazz twice in a row in 1997 and 1998 to complete the second three-peat.

Each of these years MJ and the Bulls seemed simply unstoppable. The “Certified Sports Guaranty” is responsible for collecting his shoes and preparing the “Dynasty collection“. The 6 sneakers are to be displayed at the National Sports Collectors Convention in Atlantic City. This is a once-in-a-lifetime opportunity to view all the championship shoes in pristine condition since the GOAT retired.