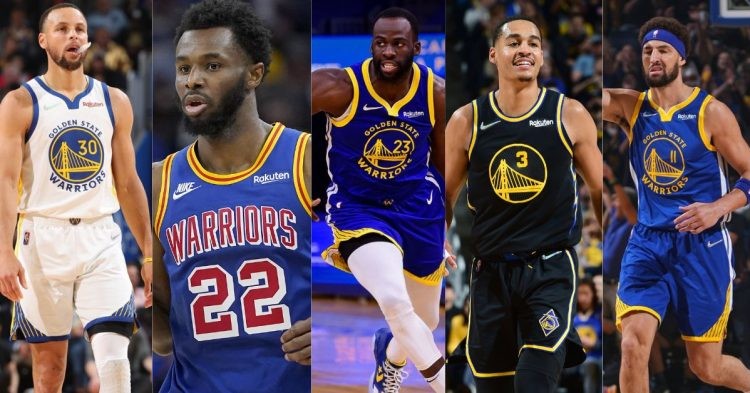 2K officially announced the new edition of NBA 2K23 a few weeks ago and has been exciting for fans worldwide. 2K announced that the one and only Michael Jordan will be the cover star, for the edition of the game under his name. Phoenix Suns star Devin Booker will be the cover athlete for the standard version of the game. You can find out more about the game’s release date and game modes here.

A few days ago, a tweet from a Twitter account caught the attention of many. The tweet was a picture of the ratings of Steph Curry, Klay Thompson, Draymond Green, and Devin Booker in 2K which was leaked. Moreover, fans were outraged after seeing the ratings given to the Golden State Warriors players.

Stephen Curry‘s rating is 93, Andrew Wiggins is 83, Draymond Green is 82, Jordan Poole is 82, and Klay Thompson is 80. Twitter users have started to express their opinions of the ratings being inaccurate.

So disrespectful to everyone especially Klay and Wiggins 👎👎👎 https://t.co/zvHAfD24yb

We can agree that 2K has done the players dirty here, even Steph Curry has an average rating despite winning Finals MVP. But one player that definitely doesn’t deserve the rating he got would be Klay. There are four other players that 2K gave a higher rating. The players are Steph, Jordan, Draymond, and Andrew. However, we can be sure that Steph definitely deserves to be where he is now. But what about the others?

It is true that Klay missed a lot of games because of his injury. But this season we witnessed him bounce back stronger than ever. The 32-year-old averaged 20.4 points during the regular season and 19 points per game during the playoffs. The only player that gets ahead of him would be Steph Curry. Moreover, Klay stepped up when GSW needed him. He made 17.0 points, 3.0 rebounds, and 2.0 assists in 6 games during the 2022 NBA Finals.

The Warriors players won their 7th NBA Championship this year, and that is no ordinary feat. Klay was instrumental in them winning the title and for him to get a lower rating than his teammates after performing better than them is unfair to the player. It is only right he is the second highest rated player behind Steph or even Draymond, but 5th place in the team is something that he wouldn’t like to see.