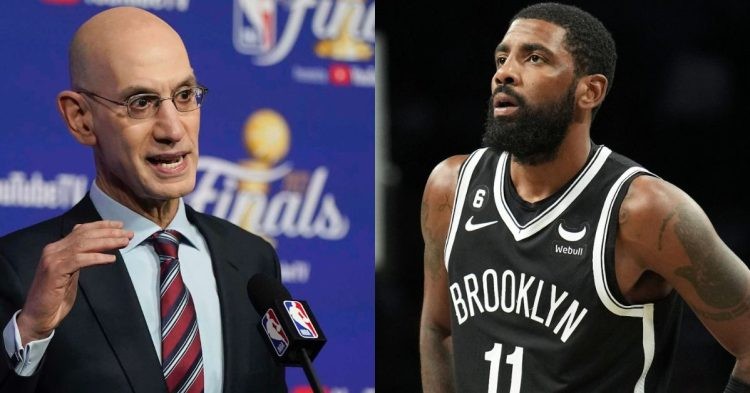 Kyrie Irving has been under fire for his promotion of an Anti-semitic film on Twitter for the past few weeks. The repercussions of Kyrie’s comments have been terrible, Brooklyn Nets have gone as far as to suspend him without pay. On top of that Kyrie also has to fulfill a few conditions before his suspension gets lifted.

– Apology for supporting the film and the falsehoods within

– Training sessions on the dangers of hate speech

One could say that all Kyrie did when he posted that movie on Twitter was express his views. But clearly, all of it has blown over and come back to haunt him. Kyrie even had a sitdown with NBA Commissioner Adam Silver. Let’s have a look

After he sat down with Kyrie Irving, this is what Adam Silver had to say about him. “We had a direct and candid conversation. He’s someone I’ve known for a decade, and I’ve never heard an anti-semitic word from him or, frankly, hate directed at any group“.

“I personally… have no doubt that he’s not antisemitic.”

He then also went on to criticize Amazon for having such a hateful film on their platform. He said, “My first instinct wasn’t that something, to me, that is so frankly vile and full of hate speech would be contained within Amazon Prime.” So, even though Kyrie has been suspended at least the Commissioner believes that he doesn’t hold hate for any one group in particular.

Kyrie Irving’s time with the Nets has been extremely weird

Irving and the Nets have had a weird relationship. Ever since Kyrie signed for the Nets he has had some of his best years on offense for this team. At the same time, his entire tenure with the Nets has been riddled with one controversy or the other.

Hopefully, Kyrie can leave all of this controversy behind and get back to doing what he is the best at, playing basketball. If Kyrie returns in time and stays healthy, then a trio of him, KD, and Ben Simmons can make a good run in the playoffs. Hopefully, this will all be over soon and we can see Kyrie balling on the court again.