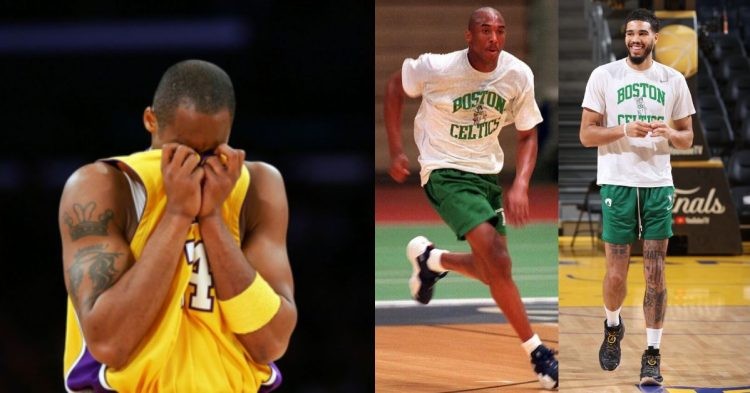 The Boston Celtics stunned the world when they pulled off the upset in game 1 of the NBA finals. Golden State crumbled at the feet of the debutants with a lack of experience. Jayson Tatum has been having a great NBA playoff and using it to pay homage to his idol, Kobe Bryant. What started as something wholesome is now becoming just plain annoying to NBA fans.

The Golden State Warriors won game 2 of the NBA finals to tie the series 1-1. But they let Boston steal one game and now need to do the same or more to be able to compete. However, Stephen Curry continued to strengthen his case to win his first-ever finals MVP with a 29-point performance. Almost 6 Warrior players scored double-digit points in the win making it a complete team effort.

JT grew up a huge Los Angeles Laker and Kobe Bryant fan. It inspired Tatum to take up the sport of basketball and is now an All-NBA caliber player. This season he averaged a career-high 27 points per game with 8 rebounds and great shooting percentages.

In the NBA playoffs, he’s already played 18 games in the first 3 rounds of the NBA playoffs with one sweep and 2 game 7’s. He averaged 26.2 points per game so far already with one of the most important series still left to go.

In game 7 of the Eastern Conference finals, he scored 26 points to beat the best team in the East. He was rocking a Kobe Bryant wristband to dedicate the performance to him. After the game, he also texted the ‘late’ Kobe Bryant.

Being a Boston superstar that adores someone from his rival team was already bad enough but seeing him force those comparisons is even worse. Before game 2, Jayson Tatum suited up to look like the one rare image of Kobe Bryant who was trying out for the Celtics before he was drafted in Boston gear.

Seeing this made the NBA fans cringe. The comment section was filled with people who were completely done seeing these forced comparisons and were begging for them to be stopped. Being named ‘the next Kobe Bryant’ is one thing but what JT has been doing has started to look pathetic in the eyes of the fans. Will he slow it down after losing or double down on the crazy?

“If It Doesn’t Work..”- Rafael Nadal Is Unsure of Another Major Surgery After French Open Win