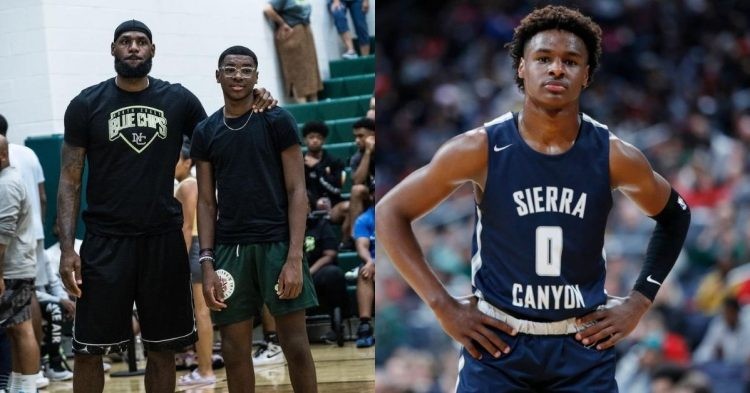 Now, LeBron has 2 sons, Bronny James who is 17, and Bryce James who is 15 years old. Ever since Bronny started playing pickup basketball he has been hounded by the media. Every time he makes a good play for his high-school team people start comparing him to LeBron and start saying things like how he is the heir to LeBron’s crown.

Everyone talks about Bronny James buts it’s actually Bryce James that might be the scary one.

Now, Bronny might be older but when LeBron posted a picture of his younger son the NBA fans lost their minds. They immediately went from calling Bronny LeBron’s heir to calling Bryce the same, and they might just have a point.

LeBron James posted a picture where his 15-year-old son Bryce was replicating something he did in a high-school game at 18 years of age.

This image immediately shifted the focus from Bronny to his younger brother Bryce. Now, Bryce is almost as tall as LeBron at 15, and by the time he is 18 he might end up being taller. Bronny on the other hand is 17 and is listed at 6’2, there is little to no chance of him being as tall as LeBron.

Bronny has an amazing skill set. He can shoot the ball, he has good defensive instincts, and a tight handle, but he still hasn’t shown us any glimpses of greatness like LeBron did during his time at school.

Bryce on the other hand already has insane athleticism as shown in LeBron’s social media post, and he is a better shooter than Bronny. To top it all off Bryce just might end up being more physically dominant than his father was at 18.

Bronny hears y’all saying Bryce is the next James! Lol 😆 but naw he looking sharp. Very fluid and explosive, and the handle is alot tighter— jumper was always there. Kid is honestly underrated

Turn up then #Bronny https://t.co/baFPKLrAx7

Bryce has never had to deal with the pressure of social media like his older brother Bronny has, but he is finally in the scope now.

Fans have been saying all kinds of stuff and some even say that LeBron believes he has a better chance of playing with Bryce in the NBA than he does with Bronny. But at the end of the day, Bronny is LeBron’s son, so if anything he is going to use this social media slander as fuel to be better. They are still very young and it will be interesting to see where their basketball career takes them in the future.