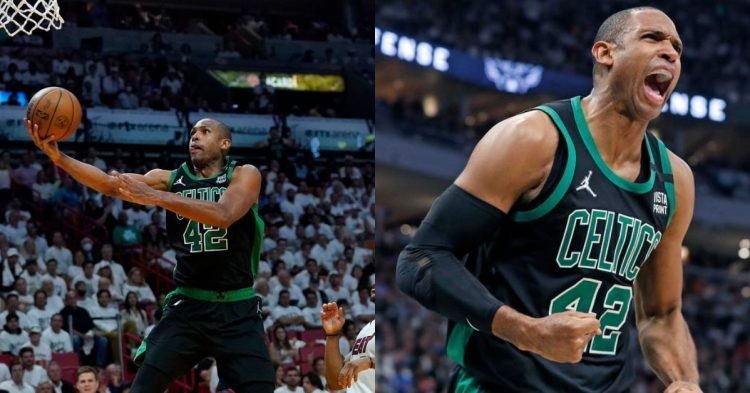 The Golden State Warriors not only choked game 1 but also their perfect homestand record after the blowout loss to the Boston Celtics. Al Horford stepped up big time to help his team steal a win on the road, something western conference powerhouses failed to do in the playoffs against Dub Nation.

Despite Jayson Tatum shooting abysmally low 17.6% from the field, the Celtics had everything going right. It appeared as though Derrick White, Al Horford, and Jaylen Brown turned into Splash bros in the final quarter. Warriors on the other hand lost a 12-digit lead and went on a scoring drought in the fourth to choke away Game 1 of the NBA Finals.

The most threes in a Finals debut ever. pic.twitter.com/DiKdwXsX4F

Al Horford has been around far too long not to make the Finals. After a terrific Game 1 performance, he is showing fans that he always belonged here. He played a major role in Boston outscoring the Warriors by 24 in the final quarter.

Horford drained 6 threes, most of which came in the final few minutes to give the Celtics a double-digit lead after trailing for the most part of the game. In addition, he had 6 rebounds and 3 assists. In his debut performance, he outplayed Klay Thompson, Jordan Poole, and Draymond Green.

On his way out after the Dub, he blew a kiss to fans in the Bay Area. This crowd will turn up louder in game 1 to watch Stephen Curry and co bounce bad and level the series.

Stephen Curry had a red hot start with 21 points in the first quarter. He went scoreless in the second and missed layups in the final few minutes of the game. However, he is not the reason why Golden State lost. The lack of offense from Klay, Poole, and Draymond cost them Game 1. Green took far too many shots and only made 2 while JP was just running around for 25 minutes.

Let alone stretching the 12-point lead, they couldn’t even hold on to it. Al Horford and Jaylen Brown took over in the final quarter and the Warriors just watched from the sidelines.