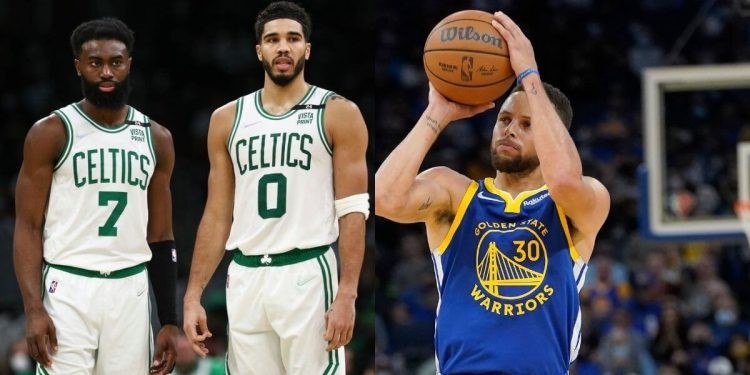 Stephen Curry and the Golden State Warriors head into Boston for Game 6 of the NBA Finals. The Warriors have a 3-2 lead on Jayson Tatum and the Celtics. They look to end the series in Boston and win the Finals.

Both these teams have proven to be the best in their respective conferences this season. The Celtics managed to elevate their play in the second half of the season. Several analysts and experts claim that the new Boston defense under Ime Udoka is one of the best we have seen in recent times.

The Celtics have a strong chance to beat the Warriors in the #NBAFinals, according to ESPN’s BPI 👀 pic.twitter.com/JJzaNSwfGF

The Golden State Warriors, one could argue have the most creative and smooth flow of offense in the league. Therefore, this matchup was considered to be quite even. GSW now has a chance to end the series on the road, while the Celtics face the pressure of having to win two games in a row to avoid elimination.

The series began with the Celtics being able to steal game 1 from the Golden State Warriors on the road. Therefore, they seemed to have taken control of the series after a win in game 3. This put the Celtics in a 2-1 lead over Golden State.

Stephen Curry had a monster 43-point scoring night to keep the warriors in the series and win game 4. Additionally, they went on to win game 5 back at the Chase Center despite Curry having an awful three-point shooting night.

Taking these factors into consideration, the Boston Celtics are still favored to take game 6 and they most likely will. We are quick to forget that the former defending champions, Giannis Antetokounmpo, and the Milwaukee Bucks had the Celtics in a very similar situation. However, they ended up losing to Boston.

Another reason why the Celtics are favored to take Game 6 is that they are simply bigger and more athletic than the Warriors. This will help them more at home and generate more offensive possessions. This series is expected to go 7 games. However, it is entirely possible Steph and GSW sense blood in the air and closes out the series in Boston.

How to watch Warriors vs Celtics Game 6?

Golden State Warriors vs Boston Celtics will be televisioned nationally in the USA on ABC at 9:00 PM ET. International users can watch the game through the NBA League Pass.