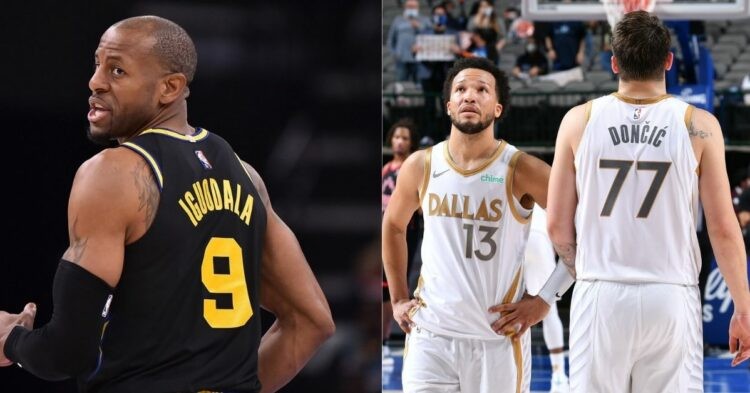 Stephen Curry, Andre Iguodala, Klay Thompson, and the Warriors core are on the cusp of another trip to the NBA Finals. However, the Warriors do not have their former 2015 finals MVP in Igoudala for this postseason.

GSW traded for Igoudala from the Miami Heat. However, he is clearly past his prime and has played less than 19 minutes a game scoring 4 points this season. Iggy has a locker room and bench vibe that is essential for the building of any championship team. But he is yet to play a minute in this Warriors- Mavs series.

Iguodala has been played sparingly, off the bench, by the Warriors. However, he has managed to rack up injuries to add to being a veteran in this league. Iggy has been listed out with a left cervical disk injury to his neck. He is yet to undergo further evaluation.

Andre Iguodala, who has missed the team’s last three playoff games due to a disc injury in his neck, is making good progress in his recovery and will be re-evaluated again in one week. pic.twitter.com/wfNawFxtKh

Iguodala may have been a key component of the Warrior’s earlier championships. However, he is nothing more than a bench player for them at this juncture in his career. He has retained some of his explosiveness. However, his endurance and efficiency get increasingly compromised.

The Warriors have had an ugly postseason battle so far. They even lost Gary Payton Jr II to a broken hand. He was the one providing them some semblance of what Iggy used to do, especially on the defensive end.

Thankfully, this series shouldn’t be impacted by Andre Iguodala’s cervical disk injury. It is highly unlikely he would have made a significant impact as compared to Klay, Poole, or Wiggins this season.

Therefore, perhaps he is in a state of his career, where he is fine being the voice of age and knowledge, coming off the bench. However, It is more than likely Stephen Curry and the Warriors bring him another championship on a silver platter. One could argue he deserves it for all he did for the Golden State dynasty.