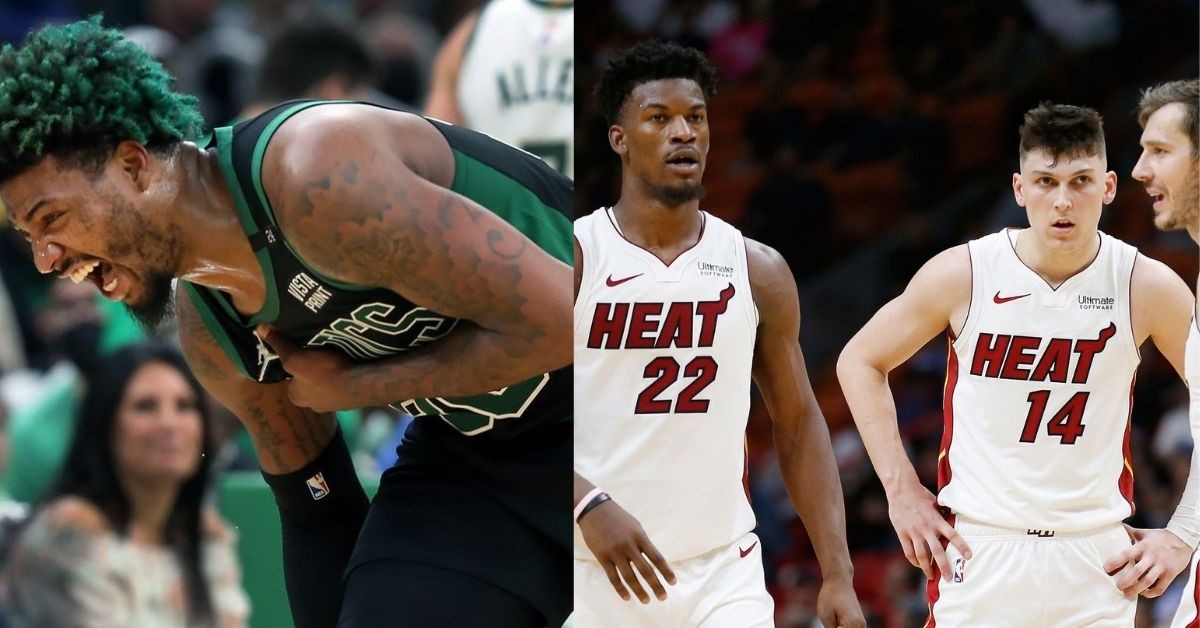 Jayson Tatum, Jaylen Brown, and Marcus Smart have carried the Boston Celtics this NBA postseason. They finished the season as the 2nd seed. Marcus Smart has elevated his defensive play this season. Therefore, he won the Defensive Player of the Year award. (DPOY).

Marcus Smart has suffered a mid-foot sprain. This occurred during game 7 of the Bucks-Celtics series. The Celtics’ point guard has been compromised as they are only 4 wins away from the NBA Finals.

Marcus Smart is listed as questionable for Game 1

Smart is arguably the best defender in the Boston Celtics. They need him to be fully healthy to defeat the Miami Heat. The Heat have a guard-deep roster and play small-ball with Bam at the Center position. Therefore, Marcus’s presence is crucial to stopping the Miami Heat’s shooters and Jimmy Butler.

Celtics are still hoping that the DPOY can be ready for Game 1 on Tuesday. 🤞 pic.twitter.com/5VxiGHvtYR

It is unclear when Marcus Smart was injured. There are reports saying it happened in a collision with Giannis Antetokounmpo towards the end of game 7. However, this is not certain. The only thing that is certain, is that Miami will be favored to take game 1.

The Miami Heat have home-court advantage in this series. Therefore, it is the perfect chance for them to strike. If the Miami Heat wins this series, they will have made the NBA Finals twice in three years.

The Boston Celtics are far from done

The Celtics’ stars Jayson Tatum and Jaylen Brown carry their offense. Therefore, it will not change much with his absence. After all, Smart has averaged only 10.5 points in his career.

Boston must hope that Marcus Smart is getting the best treatment. If they hold him off until game 3, it is likely he will be fully healthy then. However, they will have to steal at least one win on the road before coming back to defend their home court for games 3 and 4.

Injuries always play a role. However, the NBA postseason is not just about who is the best, it is about who’s the last one standing.