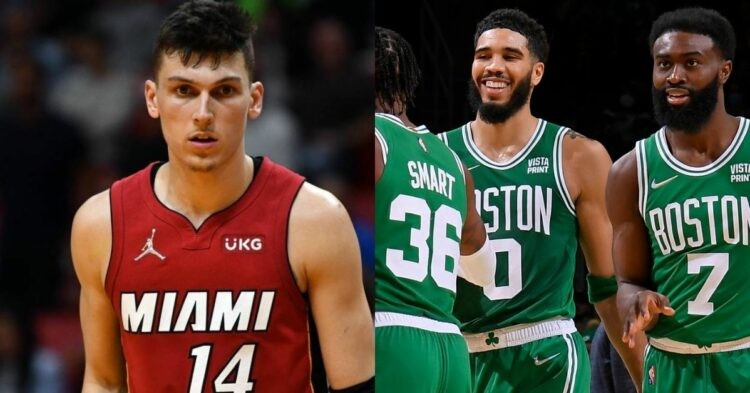 Tyler Herro, Jimmy Butler, and the Miami Heat are down 3-2 to the Boston Celtics. They now face elimination and must win 2 games in a row to get to the NBA Finals. They hope to win game 6 at Boston to force a game 7.

Jimmy has been streaky throughout this series. However, an important loss for Miami is the 6th Man of the Year. Herro played in the first 3 games of this series. But he has not suited up since with a groin injury.

Tyler Herro is questionable for game 6 vs Boston Celtics

If they are one thing the Miami Heat have been lacking in this series, it is offensive scoring. The Celtics are proving to be more offensively and defensively talented than the Heat.

A huge reason for this is Tyler Herro’s status. He was the spark plug coming off the bench for the Heat during the regular season. Additionally, he helped them to reach the 1st seed in the Eastern Conference.

Herro’s underperformance didn’t change much as the Heat won 2 out of those 3 games. However, if he returns for game 6, his team will be facing elimination. Tyler cannot afford to have another poor\sub parr game.

Tyler did not play in games 4 and 5. However, a glimmer of hope for the Heat fans is that is status has changed from “out” to “questionable”. He was in street clothes during the previous game.

Herro once said that he should be compared to Tatum and Doncic. This is his perfect chance to prove he means what he says.

However, The Boston Celtics smell blood in the air. They have not been this close to an NBA Finals for more than a decade now.

A hobbled Herro will be of no use to the Heat in this win-or-go-home game. In fact, even a healthy Tyler Herro may not make much difference in this series at this point in time.