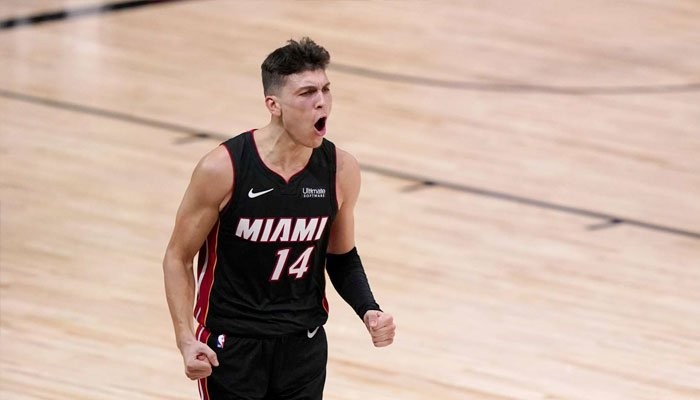 2 seasons ago, the Miami Heat were the champions of the East. They were inches away from their first NBA title since the Heatles broke up. The Miami Heat did not have one stand-out star but were a strong unit. Rookie Tyler Herro came off the bench and averaged 13 points in the regular season and 16 in the playoffs.

In the next season, the Heat were not that good and got sent home in the first round. This season, Miami has 45 wins and is the best team in the East. The revenge season came late but as the saying goes, it’s better late than never. And one of the brightest stars to shine for Miami is Tyler Herro.

Tyler Herro and his case for the 6MOTY

Tyler Herro has never become a starter for Miami. It’s because the Heat has realized that getting him off the bench is the best thing for Miami. His scoring has been increasing every season even though his role has stayed the same. This season’s jump, however, sees him leading the race for the 6th Man of the Year award.

Tyler Herro is averaging 21 points whilst shooting 38% from the 3. He’s the second-highest leading scorer in Miami and is inching his way to be the first. He’s the overwhelming favorite to win the 6th Man of the year award and could sit out the rest of the season and still win the award.

This has come due to his huge scoring performances and tonight against the Timberwolves he broke a scoring record. The Miami Heat lost to the Timberwolves by 9 points but Herro scored 30 points in the game. 20 of those points came in the first half. This performance put him at the top of the list for the most games off the bench where a player has scored 20+ points in the first half. Herro has achieved this feat 4 times and is the only player to do so in the last 25 years.

Tyler Herro came off the bench and scored 20 points in the first half.

That is now the most by any player in a season over the past 25 years ????

Tyler Herro has a lot more games to add to this record and the Heat will need it to even try to contend in the East and the NBA. They have a great flow going and with Herro soon picking up the hardware, the morale on the Heat team will be at an all-time high going into the playoffs.

How far can Herro’s performances of the bench take the Miami Heat in the quest to an NBA title? We’re just a couple of weeks away from finding out.