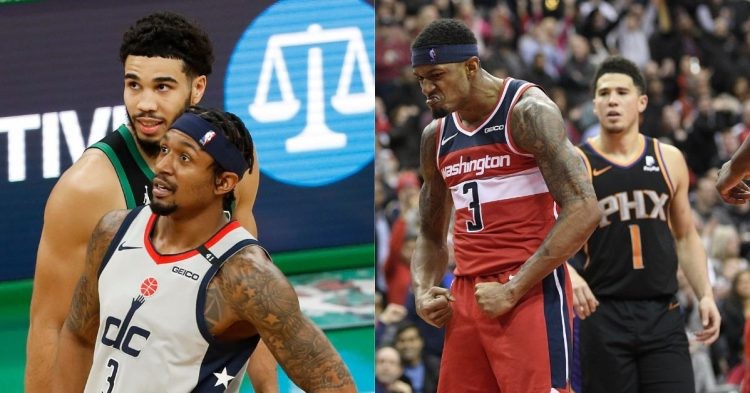 Jayson Tatum is in the first-ever NBA finals of his relatively short career. He’s always attempted to be successful and lead a team to the ‘Promised Land’. He’s the first-ever winner of the eastern conference finals MVP but in game 1 of the NBA finals, he scored less than 3 other players on his team. A video of Bradley Beal that went viral on Instagram helped Tatum plead his case.

Jayson Tatum and Devin Booker have both had their share of stats-related issues. Since Devin Booker entered the league he’s been scoring points in bunches but they never lead to wins. The biggest games of his career were chalked up to be just empty statistics. Until Chris Paul came to Phoenix, Booker was not even considered a star in the league.

Jayson Tatum has reasons to sympathize with Beal’s video

Bradley Beal has been coaching an AAU team in his time off from the NBA. The Washington Wizards missed the NBA playoffs as Beal picked up a Wrist injury that kept him sidelined during the important games. His time coaching the AAU team gave us a peek behind the curtain of what Beal feels and it gave us some truly motivational moments.

“What can you do to impact the basketball game to win? F**k your stats.”

Jayson Tatum shared this reel on his Instagram story. However, it was because of the backlash he’s received recently. In game 1 of the NBA finals, Tatum scored just 12 points. But his impact on the floor came from his distribution of the ball with his 13 assists that led the Celtics to the win. Tatum and Beal were childhood friends and if anyone understands a message, it’s the both of them.

Devin Booker also left a comment on the post as he’s been a victim of ’empty stats’ before. But with a couple of successful seasons under his belt, his name has also started to clear from that list.

Ironically the only player that needs to take that Bradley Beal advice is Beal himself. He’s averaged over 30 points per game twice in the last 3 seasons. But he’s not made it out of the 1st round since 2016. Washington is wasting his prime and he will soon be remembered as a guy that could score the ball but not win. Unless he changes that this off-season.