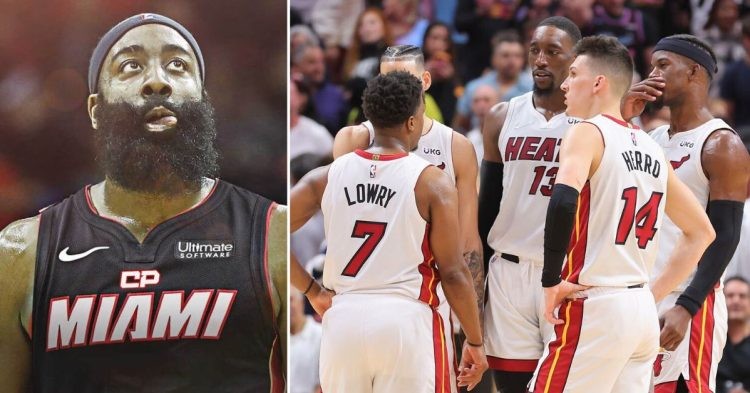 The entire James Harden debacle has taken a rather ugly turn for both parties involved. While Houston Rockets are unable to reach an agreement with any team, James Harden is acting incredibly unprofessionally in what might be his last days on the roster. Harden has made his desire to play for the Brooklyn Nets quite clear, however, the talks did not gain momentum because the Nets do not have anything left to offer.

On the other hand, the Houston Rockets started discussions with Miami Heat and Philadelphia 76ers. Although Sixers were initially reluctant to include Ben Simmons in the trade talks, reports about the contrary started emerging. However, ex-Rockets executive Daryl Morey denied them as baseless rumors.

The fact that James Harden turned down a $50 million extension makes it clear Harden wants to walk out. There is no great value in retaining a player who misses training camp to party with rappers in strip clubs or attempts to throw a basketball at rookies out of frustration. But it is necessary for Houston Rockets to milk this trade as much as they can given Harden’s trade value. This 31-year old scoring beast can elevate any team to a dynastic level with another superstar.

In all the talks that transpired between Houston Rockets and potential destinations for James Harden, lack of draft picks was the reason why the matter is up in the air. Miami Heat strictly kept Duncan Robinson and Jimmy Butler out of the talks which meant Houston didn’t have to work with in the first place. It is baffling that a player of Harden’s caliber is finding it hard to get traded. While it isn’t entirely his fault, one cannot blame the Rockets for attempting a proper rebuild in case Harden leaves.

This is precisely why they’re aiming for teams with a young core like Miami Heat and Denver Nuggets instead of a stacked Brooklyn Nets. To acquire better draft prospects Houston might even initiate talks with Pehonix suns, Minnesota Timberwolves, and New York Knicks but those teams aren’t any better than Houston Rockets without Harden which entirely negates his need for a trade.

Something similar transpired between the Houston front office and Miami front and subsequently, Heat pulled out the trade. Despite pushing hard to acquire Harden, they were forced to end the possibility because they lacked what Rockets needed, better draft picks. Having been to the finals and boasting a deep contending team, Heat is not in a position to offer first-round until 2027. Reportedly this was a major reason why trade fell through after cursory talks.

Per source, Heat no longer are engaging Rockets when it comes to Harden. Was told conversation never was more than cursory, but that, of course, always is a matter of perspective. Heat made clear on eve of 2018-19 season they were out of Jimmy Butler talks for that season.

Whether it is fair for Harden to seek a trade or not is an entirely different conversation, it is highly likely that he will meet the same fate as Kawhi Leonard did when he was traded to Toronto Raptors by the Spurs. In addition, Hander throwing tantrums isn’t helping the situation either.

Rockets believed in James Harden when he was seen as a mere bench player by the Oklahoma City Thunder. He may not have reached the superstar level he did if not for the Rockets. Harden flourished in D’Antoni’s iso ball system and made a name for himself as one of the greatest scorers. He owes them a dignified start to the season even if he is bound to leave soon.

4 Years of Rivalry Between Golden State Warriors and Cleveland Cavaliers

Stephen Curry Partners with Under Armour for Solo Shoe Brand