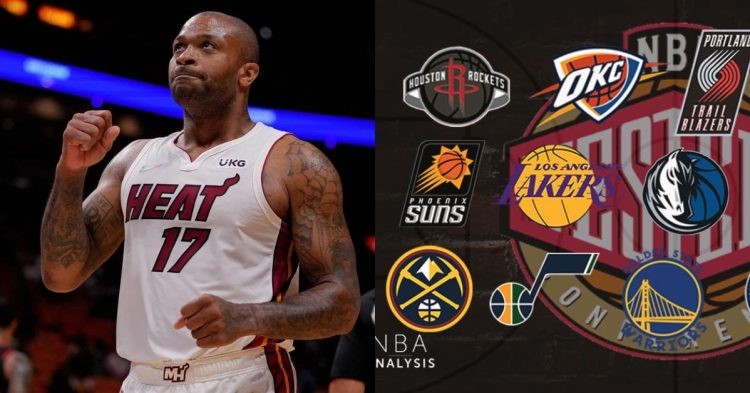 PJ Tucker, Jimmy Butler, and the Miami Heat fell one game short of making the NBA Finals. They lost to the Boston Celtics in 7 games. The veteran joined the Heat last year coming off a championship season with Giannis Antetokounmpo and The Milwaukee Bucks. He has decided to opt out of the final year of his 2 years, $14.35 million dollar deal that he signed with Miami.

The now-former Heat veteran was instrumental in the Milwaukee Bucks winning the NBA title in 2021. However, he has been unable to do the same with the Miami Heat. This is also largely due to the fact that he was injured throughout the playoffs. Be that as it may, he looks to take his skills elsewhere.

Miami’s PJ Tucker will opt out of his $7.4 million player option for the 2022-23 season and enter free agency, sources tell @TheAthletic @Stadium. Several championship contending teams are expected to compete for Tucker, who was a key part of Milwaukee’s title run in 2021.

It is interesting to observe the two sides of the NBA. On one it is a sport and people play for their love of the game. On the other hand, it is a business, and players will always look out for themselves first and put their needs ahead of anything else.

PJ Tucker probably feels he is worth a lot more

Tucker is willing to leave 7.4 million dollars on the table and test his luck with another team. This may seem like a huge amount. However, to an NBA superstar, this is nothing but a small fraction of what he could potentially make.

The LA Lakers Russel Westbrook is making around 41 million dollars per year in comparison. This is clearly much more than what the Heat were willing to offer Tucker when they took him on. He clearly thinks he is worth more, which can be seen through his decision to opt out of the final year of his contract.

PJ was averaging 7.6 points. 2.1 assists and 5.5 rebounds with the Miami Heat this season. Additionally, he was shooting 48% from the field and 41% from the three-point line. Moreover, he brings a lot to the table with his gritty defense and vocal support.

It is difficult to predict which teams would acquire the defense-minded veteran as he pursues free agency. Be that as it may, there are two teams who have proven they have a need for a strong defense this season.

They are the Brooklyn Nets and Los Angeles Lakers. Both these star-studded teams have shown a gaping hole on the defensive end and he could fit as a defensive anchor for either of these teams. However, both these teams have players with really expensive contracts and are unlikely to give Tucker the money he expects.

Therefore, the remaining conclusion is that PJ is happy that he won a title and is looking for a mid-tier team that is willing to pay solid money in order to obtain him in his free agency.