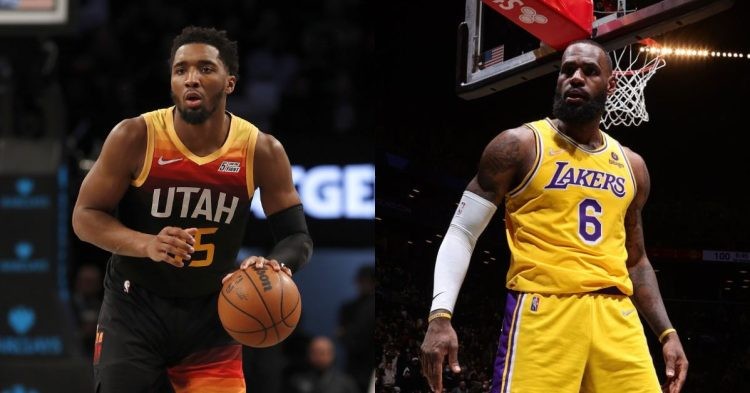 Donovan Mitchell is starting to take the main position in the trade market right now. After the end of Kevin Durant’s saga with the Brooklyn Nets, Mitchell may cause a frenzy now. Reports say that there are many teams after the three-time All-Star. One of the teams is the New York Knicks.

Mitchell has been the best player for the Utah Jazz for a while now. The Jazz drafted him at #13 in the 2017 NBA Draft. Since then, Donovan has averaged 24.3 points, 4.5 assists, and 4.2 rebounds in 384 games, according to statmuse. There haven’t been many young players with the same impact as Mitchell in this period.

The Lakers are interested in Donovan Mitchell, per @Gambo987 pic.twitter.com/GxBqpAQb6I

His exceptional numbers have attracted the attention of many franchises, reports say. Many sources claim that the Knicks are on the verge of agreeing on a deal with the Jazz for the player. However, a team has joined the race very recently, hoping to take away Mitchell right from the Knicks’ noses.

Will Donovan Mitchell join LeBron James at the Lakers?

Mitchell has reportedly attracted attention from LeBron James and the Lakers. If the Utah Jazz decides to let their best young star, it would surely be for something as good in return. The Lakers have two first-round picks, for the 2027 and 2029 NBA Drafts. That may be enough to get the Jazz’s attention, but will that lure them into accepting the offer? The Knicks have also resumed talks with them and have made a brilliant offer.

According to reports, the Knicks have decided to give up five of their first-round draft picks, together with Obi Toppin and Evan Fournier. Even if the Lakers were to match that offer, do they have the players? The one player they will be looking to offload will be Russell Westbrook, who has not had a good time in LA so far.

Couple things on Donovan Mitchell. The Hawks, Heat & Kings are NOT interested contrary to reports. Knicks still have the best package to offer but other teams interested are Cleveland, Washington, Charlotte, LA Lakers & Brooklyn. And no the Jazz never asked for 7 1st round picks!

In addition to that, the Knicks and Lakers are not the only two teams who could be interested in the player. The Brooklyn Nets, Washington Wizards, Cleveland Cavaliers, and Charlotte Hornets could also be interested in acquiring Mitchell’s services.

The number of teams running after the “Spida” is not surprising at all. He has made a name for himself with his gameplay and the level of confidence he displays on the court every time he steps on it. With an attitude like that, any player would attract the biggest teams in the world.