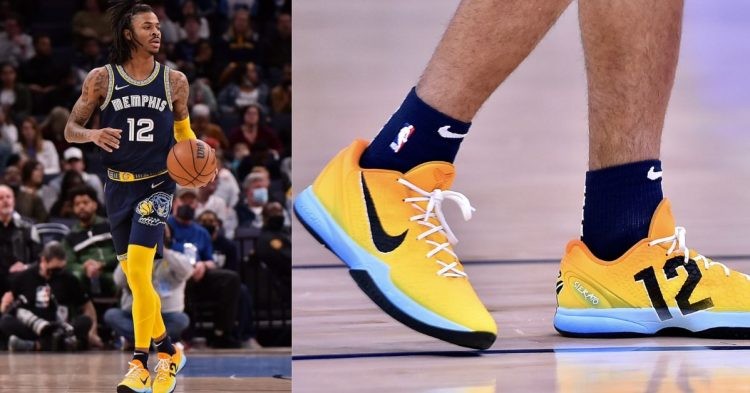 When we talk about world-class talents in the NBA, there are many like Donovan Mitchell, Jordan Poole and Anthony Edwards. One such player is Ja Morant. He currently plays for the Memphis Grizzlies after they drafted him at #2 in the 2019 NBA Draft.

If we’re talking about his numbers, then the fact that he led Memphis to the playoffs should be mentioned too. In the 2021-22 NBA season, the Grizzlies finished second in the Western Conference table, with the Phoenix Suns coming out as the clear winners. Ja was instrumental in the team’s success.

According to the Sole Retriever, Ja Morant will be Nike’s latest athlete to have a signature shoe. Although the exact release date is still unknown, we can expect them to drop in sometime around Summer 2023. The plans for the sport brand is to launch three colorways: Phantom, Cobalt Bliss and Game Royal. Nike will price all the three models at $110, according to reports.

Considering the sneakerheads that are already smacking their lips seeing Nike’s new project with Ja, the actual prices may differ next year.

Ja has been a Nike athlete for a while now. In fact, he signed with The Swoosh even before he became an NBA player. In May 2019, Morant announced to the world that he has decided to go with Nike’s sponsorship. The American posted it on his Instagram page, saying, “All my life my parents worked for a check. Now I’m proud to say I work for the check.”

Many may wonder how Ja has pulled off this feat at such a young age. Usually, huge superstars who can sell out arenas on their own are the ones that sports brands eye to sponsor. Now, Ja may not have that status yet, but its safe to say that he’s working towards it.

His 2021-22 season in the league played a pivotal role in him landing the deal, as he made his mark as one of the best young players in the league. It seems like Nike have landed a young player with all the potential in the world to become the best, just like they did with LeBron James back in the day.