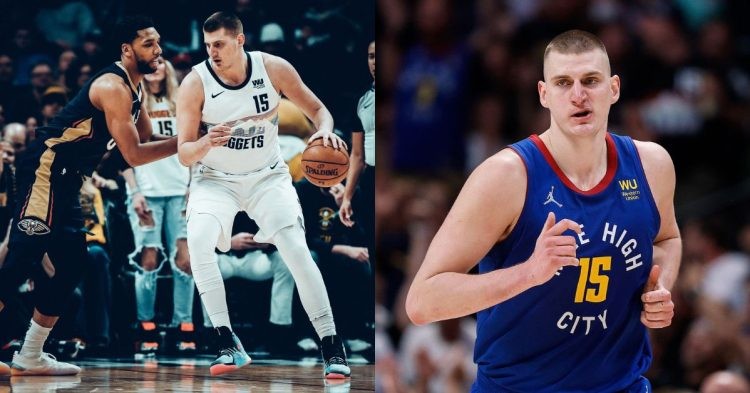 When you think of a unicorn big man, Nikola Jokic is the first person to pop up in your mind. But even when it comes to that, he isn’t your average unicorn. Jokic averages 19 points, 10 rebounds, and 6.2 assists per game for his career while shooting a respectable 34.5% from three.

He isn’t the best defender out there but he can indeed hold his own. The man can drop a triple-double at will. Fresh off of 2 back-to-back MVPs, Jokic has just signed the richest contract in the history of the NBA.

Jokic is the most important member of the Denver Nuggets at the moment. A healthy Nuggets team with Jamal Murray and Jokic poses a championship threat, whereas without Jokic they would struggle to make the playoffs. When you’re that valuable you get your worth. Let’s have a look at Nikola’s NBA contract, salary, and endorsement deals.

This past week, Jokic signed a 5-year $264M with the Denver Nuggets. This will net him an average salary of around $52.8M per season.

Nikola Jokic has agreed to a five-year, $264M supermax with the Nuggets, per @ShamsCharania

In his young 7-year career, Nikola has gone from being an out-of-shape second-round pick to the best center in the league and the highest-paid player in the league. He has made about $116,900,675 in NBA salary alone. Let’s have a closer look at what he has made over the years.

The Joker has a shoe deal with Nike that nets a figure close to $500,000 annually, Jokic currently doesn’t have a shoe deal but with the rapid ascent that he has seen, he is bound to get a more lucrative shoe deal with a signature shoe once his current contract expires.

Nikola Jokic has one of the best logos wearing the Nike Zoom Rize 2 🃏 pic.twitter.com/SIQDsW7Hhm

Nikola makes close to $500,000 from his endorsements with Western Union and Panini. He features on posters and advertisements for Western Union, and He is involved in trading cards and signed merchandise with Panini. Jokic is a quiet man who only cares about winning so currently, he doesn’t have a lot of endorsement deals despite his level of fame.

Stephen Curry and the Warriors eliminated The Nuggets from the playoffs this year, Jokic single-handedly carried his squad to the playoffs despite Jamal Murray being out due to injury. A healthy Nuggets squad will be looking to make some headlines next season as they return with their original core.