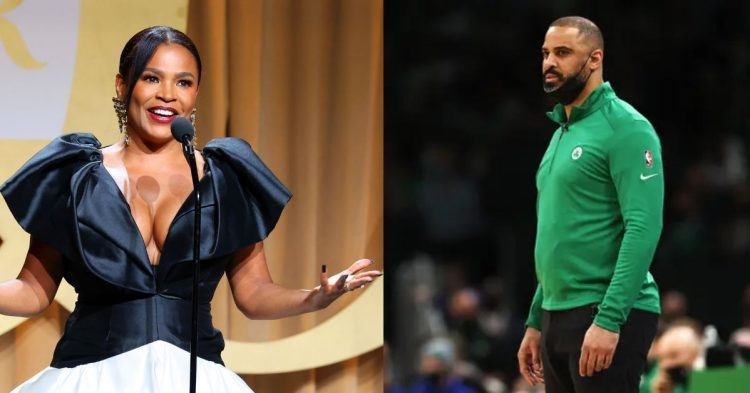 Former Boston Celtics coach Ime Udoka on the court and his Nia Long in an interview (Credit: Twitter)

Former Boston Celtics coach Ime Udoka was in the news this NBA offseason. His fiancee Nia Long recently released a scathing statement and called out the Celtics organization. To those who are unaware of what happened, Ime was removed from his position after news of a relationship with a woman from the Celtics organization soon surfaced. This was after making the NBA Finals coaching Celtics star Jayson Tatum and others.

The woman’s identity was hidden and only Ime seems to have borne the brunt of scrutiny and questioning from the world. Moreover, his personal relationship with his fiancee and son was certainly compromised after these events.

We should wonder what Nia Long had to say on this issue and why she seems to think the Celtics are to blame. After all, Ime clearly made the decision to cheat on her himself and Boston played no real role in that. Therefore, we should take a look at her perspective and understand the situation.

This is certainly a very sensitive issue. We are already aware of how unfounded accusations have the potential to cause chaos. Relationships that border on extramarital affairs are always tricky to handle and frowned upon.

With that being said, it is clear that Nia feels like the Celtics mistreated her and her feelings in this entire process. That would certainly make some sense. After all, her name was released to the public, while the mystery Celtics woman’s identity was fiercely protected. It turns out that Long was able to forgive Udoka for his mistakes. However, forgiving the organization would prove to be much trickier.

“If you’re in the business of protecting women — I’m sorry, no one from the Celtics organization has even called to see if I’m OK, to see if my children are OK. It’s very disappointing.”

(Via The Hollywood Reporter) pic.twitter.com/9tEledSsw9

“I think the most heartbreaking thing about all of this was seeing my son’s face when the Boston Celtics organization decided to make a very private situation public. It was devastating, and it still is…If you’re in the business of protecting women, I’m sorry, no one from the Celtics organization has even called to see if I’m OK, to see if my children are OK. It’s very disappointing. I have to commit myself to my work because I think sometimes when so much is happening, it takes your breath away.”

“The most heartbreaking thing about all of this was seeing my son’s face when the Celtics decided to make a very private situation public. The organization hasn’t called to see if my children or I are OK. It’s very disappointing.”

Nia Long certainly raises some very valid points. Perhaps the Celtics were wrong in publicizing only a part of this investigation and scandal. Moreover, not having the courtesy to check up on Nia is also questionable. However, we really can’t throw too much blame on the Celtics. After all, what could they have done other than potentially enraging her?

In any case, we hope all the sides affected learn from this. That seems to be the only thing that can be done in the aftermath of these events.