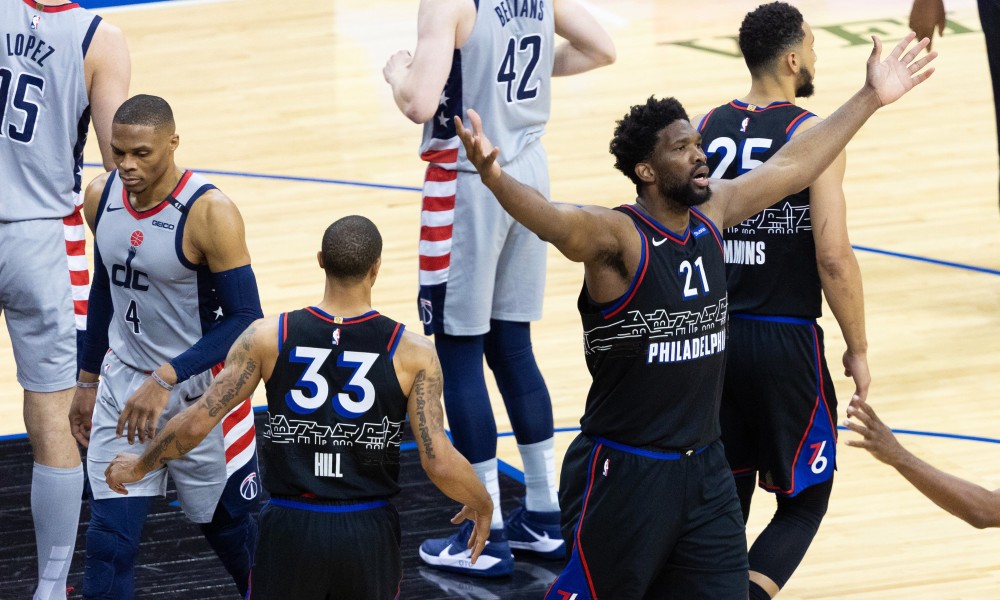 May 23, 2021; Philadelphia, Pennsylvania, USA; Philadelphia 76ers center Joel Embiid (21) reacts next to Washington Wizards guard Russell Westbrook (4) after a score and one during the second quarter of game one in the first round of the 2021 NBA Playoffs at Wells Fargo Center. Mandatory Credit: Bill Streicher-USA TODAY Sports

Joel Embidd has been one of the best centers in the league. Lately, he has shown that he is the best center as he is having another MVP-worthy season.

If it wasn’t for injury last year, the award might have gone to Embidd. However, this season Embidd is healthy and is ready to make another case for MVP.

However, in the month of January, he has taken his game to another level. Joel Embidd is averaging 35 points on 54% shooting from the field in just 31 minutes per game.

Even in the clutch, he has been sensational. He is leading the league in clutch points (109 points), field goal attempted and free throws attempted. He is also doing all this efficiently shooting 51% from the field and 46% from behind the arc.

Despite missing their star Ben Simmons, Embidd has carried the whole team on his back and is right sitting comfortably at the 6th seed with a record of 28-19.

Joel Embidd: One of the most skilled centers ever

Embidd is a freak of nature. A 7 footer who can shoot the ball from anywhere and everywhere with a body like Shaq. He can put the ball on the floor and can shoot off the dribble and can also take it to the hole.

Even though we have seen many players at the Center position who can shoot like Hakeem, Dirk but Embidd can stretch the floor with his three-point shooting and also play back to the basket like Shaq and be Men among Boys.

Even on the defensive end, he averages close to 2 blocks per game and 0.8 steals for his career. He was also selected for 2nd team all-defense. If it wasn’t for his injuries he would’ve dominated both ends of the floor consistently.

Even Shaq admires Embidd abilities and calls him more talented than he ever was. Thus, we can say that Embidd has it all with body-to-shooting to defense and is worthy of being among the most skilled centers in the league.

“Eagle FC Is Here” – Khabib Nurmagomedov Sends a Message to Dana White, Asks UFC to Be Careful With Their Fighters

“Chuck Eat a Twinkie and Be Quiet”: Trae Young Fires Back at Charles Barkley for Being Named an All-Star Starter This Season