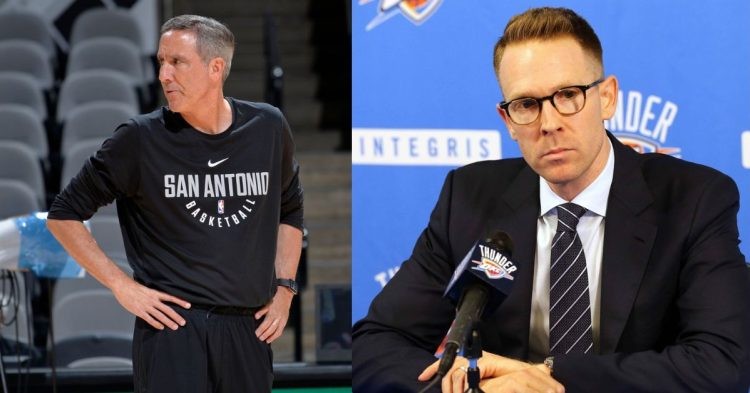 The Oklahoma City Thunder were once one of the best teams in the NBA. That was when they boasted a team that included Russell Westbrook and Kevin Durant. However, the past few years have been hard for OKC fans. They missed the playoffs this year for the second consecutive time.

The last time OKC made it to the NBA finals was in 2012. That year, a young LeBron James lined up against KD to snatch the title in a 4-1 series win. LeBron won his first-ever Finals MVP after the remarkable performances he put up during the finals.

The OKC wrapped up the 2021-22 season after losing by 50 points to the LA Clippers in April. Their record for this season is 24-58 as they finished 14th in the Western Conference standings. The ORtg for OKC this season is just 104.6, according to statmuse.com. It is the number of points a team scores per 100 possessions of the ball.

The OKC board has decided to improve on their shooting by hiring one of the best shooting coaches the NBA has to offer.

Chip Engelland has seen many players come up the ranks. He has been with the San Antonio Spurs for 17 years. The amount of time he has spent at the highest level should tell you that the OKC is not looking to mess around this season.

The 61-year-old has a long-standing friendship with OKC GM Sam Presti. The pair worked together at the Spurs where Presti was part of the administrative team.

ESPN Sources: The Oklahoma City Thunder are hiring Chip Engelland as an assistant coach. Engelland, considered the NBA’s preeminent shooting coach, spent 17 years with the Spurs where he’s considered to have had an immense impact on Kawhi Leonard and Tony Parker, among others.

Engelland will inherit a young squad in Oklahoma. The OKC team’s average age was 24.1 in 2021. That was the lowest in the league, with the Lakers at the top. The statistic might not surprise many, as the Thunder are known to be in a rebuilding process.

The former Spurs coach will surely help the young stars of the team. During his time with the Spurs, he has helped improve the shooting of world-class players such as Kawhi Leonard and Dejounte Murray. He even helped Kawhi’s shooting increase by 14% after joining the Spurs.

So, here are some graphs of the amazing work he’s done with some of the Spurs’ top young players over the years. NBA’s best shot trainer. pic.twitter.com/t7ur7emYpe

With the Thunder, he has Chet Holmgren who definitely has the talent to be an All-Star one day. The OKC picked him up as the No.2 pick at the 2022 NBA Draft.

Another player that Chip will help is Josh Giddey. Shooting is Chip’s expertise, and that’s where Josh needs guidance in. In 54 games this season, he was only able to average 12.5 points per game. However, OKC fans can hope that number to increase now that he is in good hands.

It is clear that hiring Chip is a step in the right direction for OKC and they can now focus on other aspects of the rebuild process. The Thunder were one of the most dominant teams in the 2010s, and with the best shooting coach in the league, they have a good chance of getting back there.