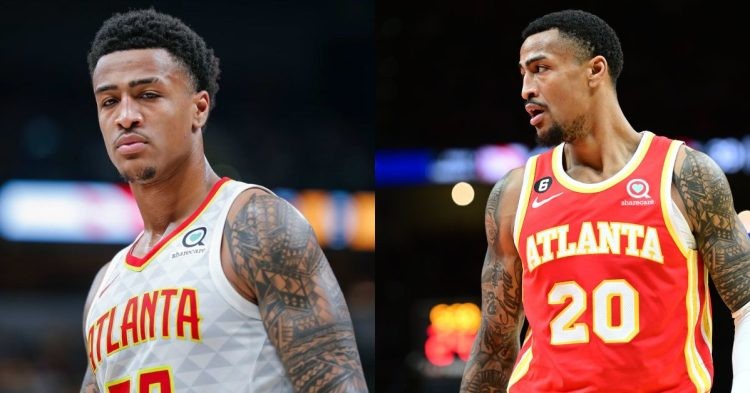 The 2022-23 NBA season is in full swing once again and the standings are starting to take shape. One of the teams that have been doing well would be the Atlanta Hawks. They currently sit in 3rd place in the Eastern Conference table. Despite having a decent roster, the Hawks are active in the market as well. According to reports, they are looking to offload John Collins and strengthen their roster.

It seems like the annual rumor fest surrounding Collins might be back once again. According to Shams Charania, the Phoenix Suns are one of the teams who are interested in the player. In addition to that, the reports mention that the Suns are hesitant about going ahead with signing John. The main reason they are holding back would be the fact that they would have to pay over $50 million for the remaining 2 years of his contract.

Why do the Atlanta Hawks want to trade John Collins?

In the midst of the yearly trade rumors, StatMuse has shocked the NBA community with a statistic as well. The numbers may explain why the Hawks are looking to offload the American player.

On the lowest usage rate of his career. pic.twitter.com/ruzMxii2uJ

The stat compares Collins’ numbers for this season so far with his rookie year. The Atlanta Hawks drafted him as the 19th overall pick in the 2017 NBA Draft. The 25-year-old has stayed with the same franchise since then. In his rookie season, Collins played 74 games. He averaged 10.5 points, 7.3 rebounds, and 1.3 assists. Together with that, his FGA was at 7.4 and 3P% was 34.

If we compare his numbers with this season, it seems like Collins has been having a tough time recently. He has played 15 games this season, averaging 12.6 points, 7.7 rebounds, and 0.9 assists. His FG is at 10.0, and his 3-pointers haven’t been impressive either, with just 22.7 in 3P%.

The Hawks power forward enjoyed his best year in the NBA in the 2019-20 season. He had averaged 21.6 points per game that year, together with 10.1 rebounds. His shooting was also quite decent, considering he made 40.1% of his 3-pointers. Since Trae Young joined the Hawks, Collins has had decent chemistry with him. The latter seems to be doing well in screens during their pick and roll plays.

John has stepped into more of an offensive role since Clint Capela assumes the center role in the Hawks team. In addition to that, it seems like Dejounte Murray‘s arrival has also affected Collins’ performances. We still do not know whether the Hawks will end up trading him this year, or it will be the same old story as the past couple of months.