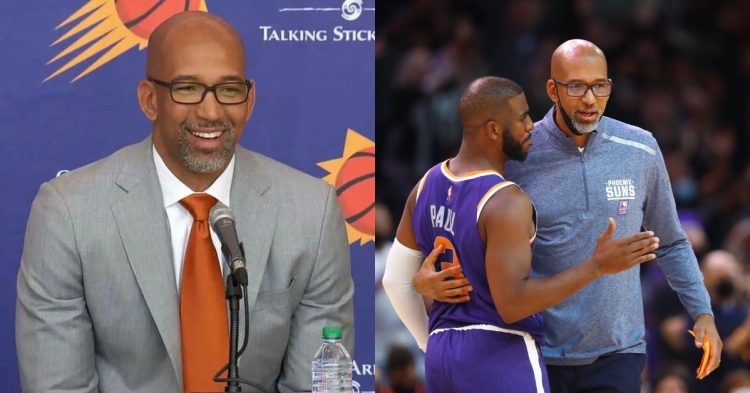 The Phoenix Suns are the team that has had the best glow-up in modern NBA history. They missed the playoffs for 10 straight years in a row and were labeled as the bottom feeders. From there, to where they are right now is astronomical. And they are giving Coach Monty Williams the credit he deserves with a huge contract extension.

Monty Williams, a player, was drafted into the NBA in 1995. In his career, he’s played for New York, San Antonio, Orlando, and Philadelphia. He technically also played for Denver for a total of 6 minutes. He was a bottom-tier role player at best. Monty never averaged over 10 points per game in any season but was a decent defender. As a coach, however, his impact has been revolutionary and he seems to have found his calling with Phoenix.

Just 2 years after leaving the NBA he attempted to get into coaching. He got into the Portland coaching staff. Nate McMillian was the head coach and Monty learned a lot from him. The ‘New Orleans Hornets’ believed in Williams and offered him a promotion. As head coach of the Hornets, he wasn’t great.

In 394 games as head coach Williams racked up just 173 wins and 221 losses. The fact that he stayed around for 5 years with that record was enough of a surprise. But he got demoted again. In 2015-16 he was the associate head coach of OKC.

Monty Williams earns himself a payday

However, after that, he lost his spot in the NBA. He came back in 18-19 as a member of the 76ers coaching staff and teams were reminded of how good he could be. Phoenix was already bad but still gave Monty a shot to save their future.

And he’s delivered. With the acquisition of Chris Paul and the development of D Book and Deandre Ayton, they have won a lot. In 2 seasons, they have made one final appearance and last season they were the number one seed in the NBA, by a mile.

For the 2021-22 season, Williams won the coach of the year award and won 81 of a possible 100 first-place votes and 458 total points. However, in recent years that does not guarantee you a future until you win a title. But Phoenix feels that they have found their man and they have offered him an extension.

“Phoenix Suns coach Monty Williams has agreed on a long-term contract extension. Williams, the NBA’s coach of the year, had two years left on his original five-year deal — and now moves under contract for several more seasons.”

ESPN Sources: Phoenix Suns coach Monty Williams has agreed on a long-term contract extension. Williams, the NBA’s coach of the year, had two years left on his original five-year deal — and now moves under contract for several more seasons.

He’s getting the superstar treatment with a contract offer that gives him job security for a considerable time. But the defined term is ‘several more seasons’ and not confirmed how much longer. Also, despite what the years on the contract say, one bad season is enough to send a coach home. At least money is guaranteed and well deserved.