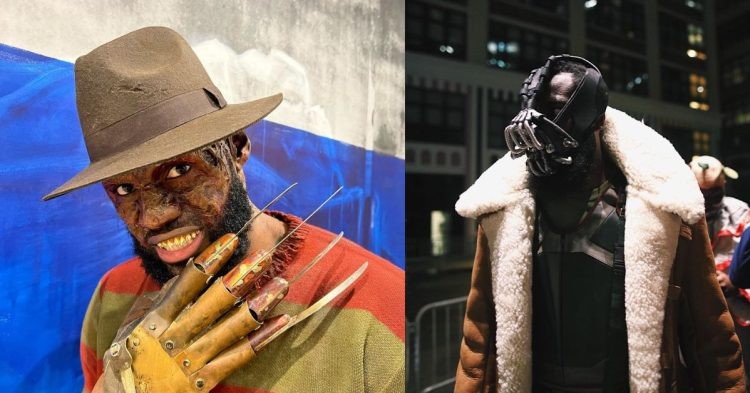 One of the popular festivals in the Western world is Halloween. It is a day when even NBA stars like LeBron James and James Harden wear costumes based on fictional characters. He is not the only player who has adorned a costume for this occasion.

The NBA tunnel is always a movie on Halloween 😂🎃 pic.twitter.com/tfdvTeQaw2

While only children go “trick or treating“, adults are still free to go party in their attires. Well, these players certainly caught the eyes of the public who instantly posted it on social media. One should wonder which players wore which costumes. Ranking these costumes and discussing the context behind them will also be quite a fun thing to do

Several NBA players put a lot of thought and creativity into dressing up for the day. Therefore, it is difficult to say that one costume stands above all the rest. However, there is no arguing that Philadelphia 76ers star James Harden’s costume as Bane was one of the best.

Fans familiar with the superhero world know that Bane is the antagonist in a Batman movie. Harden’s frame and large size make him look identical to Bane. Therefore, we might just have to concede to the supremacy of his costume.

Which @NBA players had the best #Halloween costumes? 🎃 pic.twitter.com/5DHbAVnBm4

The face of the NBA, LeBron James dressed up as Freddy Kruger, a character in the “Nightmare of Elm Street” film series. He looked just like a monster and wore the makeup necessary to pull off a similar appearance to Kruger.

Klay Thompson dressed up as Jackie Moon. Jackie is a character from the movie “Semi-Pro” played by comedian Will Ferrell. Damian Lillard came as WWE wrestler Steve Austin. Stephen Curry was Jigsaw, a serial killer from a movie.

There were several other players who participated in celebrating Halloween. Additionally, NBA fans were able to react to all the photos thanks to social media platforms and found all of this quite entertaining. We should wonder why so many of these players are representing serial killers on Halloween. That gives us something to think about.