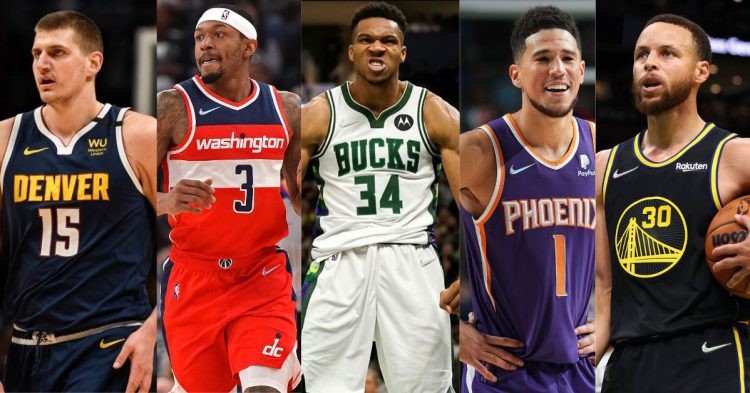 The last couple of days have been eventful for the NBA. Players have left teams, renewed contracts, signed mega new contracts, and much more. The most expensive NBA contract is the one signed recently. Shams Charania has reported that Nikola Jokic took over as the highest-paid player in the league’s entirety.

The recent developments in the Nuggets’ star’s contract have brought one question to all our minds; how do the most expensive contracts look? Let’s have a look at the list.

Nikola Jokic recently signed a supermax contract with the Nuggets. The contract is for 5 years and is worth more than $265m. The price tag shows how much the Denver Nuggets want to keep hold of their star player and the great lengths they’re willing to go to do just that.

Who was the player with the biggest contract before Nikola Jokic?

Many would think Bradley Beal held the spot before Nikola made it his own. However, it was in fact Giannis Antetokounmpo who had the most lucrative contract in NBA history. The Bucks star signed a 5-year contract in 2021. The contract was worth around $220m, which made him the highest-paid player in the league.

Giannis lost two places in one day after Bradley Beal also signed a new contract today. The Wizards star signed a 5-year contract that was worth $251m, just over a quarter million dollars. The Washington Wizards will hope to build around Beal as they look to perform better in the coming seasons. The Wizards have now missed the playoffs in three of the last five years. When they did make it to the playoffs, they could not pass Round 1.
After the changes in the contract situations of players, the league is guaranteed to be interesting next season. Nikola Jokic and Bradley Beal will definitely have much more pressure on them, together with Devin Booker. The reason for this would be that the price tag would always be brought up when their names are mentioned.
Tags: Bradley BealDevin BookerGiannis AntetokounmpoNikola JokicStephen CurryZach LaVine
Previous Post