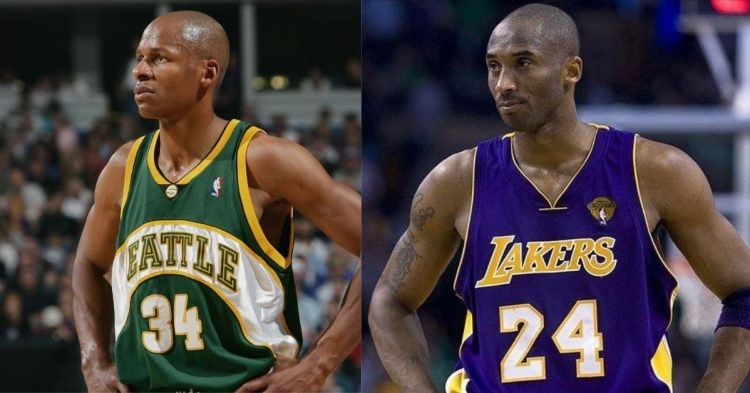 Ray Allen is a former NBA player and one of the greatest three-point shooters in the NBA. He held the record for most three-pointers made(2973) before Stephen Curry surpassed it. Ray was part of several teams throughout his NBA career. He recently looked back at a time when one of his greatest early performances was overshadowed by Kobe Bryant.

Allen is a 2x NBA champion and won with the Boston Celtics in 2008, as well as the Miami Heat in 2013. We look further back to 22nd January 2006, when he and Kobe put up performances that the NBA will remember for ages.

It is important to note that Ray and Kobe have known each other for a long time. Kobe joined the NBA just one year after Allen in 1996. Therefore, there was always a competitive spirit between them as they were both “young pups” looking to make a name in the league.

On January 22nd, 2006, during the regular season, Ray and the Seattle Supersonics faced the Phoenix Suns. This was not an easy game for them and went into double overtime. Thanks to Allen’s 42-point performance and game-winning shot, the Supersonics got the win 152-149.

His joy was short-lived as that was the same day Kobe scored 81 points vs the Toronto Raptors. Allen reacted to his performance and described how Bryant took the limelight away.

“Oh yeah this one every time I think about this game-winner against the Suns, it always reminds me of how that night I think I had 41 or 42 and a lot in the fourth quarter. Everybody was sitting at the back of the bus getting ready to go back to the hotel. Guys were like man you were killing it out there it was awesome. One of my other teammates goes Yo Kobe Bryant has 61 points in three quarters. I was like what… I was like leave it up to Kobe to outdo me on that one.”

The Mamba certainly stole the limelight that night. It would interest NBA fans to know that Kobe’s 81-point record has not been broken since 2006. Wilt Chamberlain is the only other player to have recorded more points in an NBA game. Therefore, one could say that Kobe outdid almost everyone that night. Not just Ray Allen.