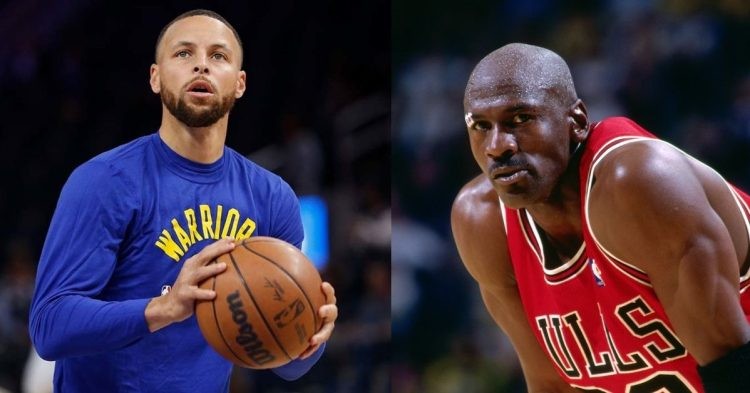 LeBron James and Michael Jordan have dominated the GOAT discussion for a long time. According to Bobby Marks, NBA front office insider, and ESPN analyst, Stephen Curry in the 13th year of his career, should be placed in the middle of this conversation.

Curry won his 4th NBA title this year against the Boston Celtics. Additionally, he won his first Finals MVP. However, one must wonder if this can be considered enough to be inserted into the top 2 or 3. Especially, considering the media was barely willing to admit he has become top 10 after this year’s finals performance.

The NBA has a plethora of “old heads“, either analysts, fans, or any random person with an opinion to share. This same group of people finds it difficult to compare the greatness displayed in present times, to that of the past. Therefore, it is challenging to change someone’s opinion or try to change what people consider “established“.

The argument that people had over LeBron was a “killer mentality” that MJ possessed. Marks revealed that this had a lot to do with him giving Curry this high pedestal.

“I actually think Steph Curry is the second-best player of all time, right behind Michael Jordan. Curry has this instinct that I saw with Jordan where anytime he has the ball you think it is going to go in. He is a threat offensively, I think we have got 3 or 4 more years of Curry in his prime right now… But I would put Curry ahead of LeBron James right now behind Michael Jordan.”

One must wonder whether Curry really has the “killer mentality” that we hear LeBron James does not possess. He is as great. if not greater in terms of pure talent as Bron and Jordan. Moreover, he has exceeded expectations and changed narratives. They have boosted his value and all-time ranking in the eyes of the fans.

Curry should be ranked higher as he was instrumental in GSW  winning an NBA title without Kevin Durant. It is quite safe to say almost every single fan in the NBA thought the Warriors were over in 2019. Kawhi Leonard and the Toronto Raptors had eliminated them in 6 games. Additionally, KD and Klay were both injured in this NBA finals run. Durant even requested a trade soon after the loss and the era of the Warriors seemed over.

By winning this title, he has not only proved he can win without Durant. He has also proved he can win just as many titles as LeBron James with a single team. However, considering his team was much better than LeBron’s was, and he had much better teammates, one must wonder whether he is already knocking LeBron off this list.