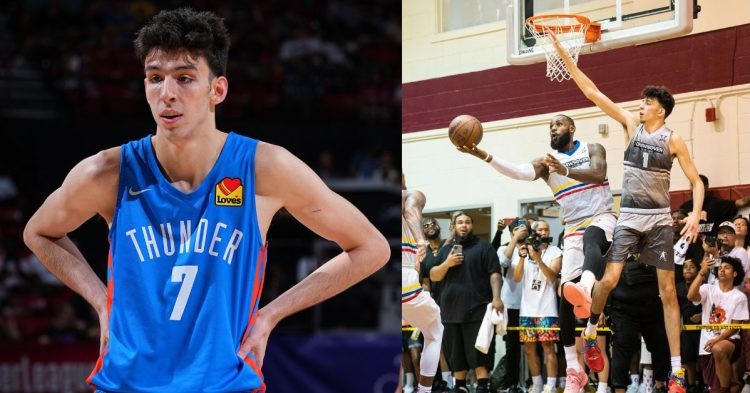 Chet Holmgren is one of the most promising youngsters in the NBA. The Oklahoma City Thunder drafted the player at #2 in the 2022 NBA Draft. Since then, he has only featured for the OKC in the 2022 Summer League. During the tournament, Holmgren averaged 14.0 points, 8.4 rebounds, and 2.8 assists in five games.

Chet raised the expectations for himself after such a good spell at the Summer League this year. Many have even compared him to former OKC star Kevin Durant. The Thunder fans may hate him for leaving them for the Golden State Warriors, but they would admit he played exceptionally for them.

The main reason why Chet is compared to KD will be his size and frame. Despite being quite tall and skinny, both these players have used that to their advantage. It seems like Chet’s ability to handle the ball that well reminds the fans of KD in his prime Thunder days. We only expected him to take the NBA by storm this upcoming season.

Recently, Jamal Crawford, an NBA veteran, held the Crawsover Pro-am basketball event. NBA stars LeBron James and Jayson Tatum all featured, together with new faces Chet and Paolo Banchero. During the event, LeBron and Jayson took over the event and gave the fans a treat.

Breaking: Chet Holmgren will miss the 2022-2023 season with a Lisfranc injury to his right foot.

Holmgren suffered the injury in a Pro-Am game in Seattle on Saturday. pic.twitter.com/iXolvgdStP

During one of the plays, Chet was defending LeBron as the latter was dribbling up to the rim. As LeBron passed the ball up, Holmgren seemed to have injured his right foot. He did not disclose the type of injury at the time.

Chet Holmgren appeared to injure his ankle while guarding LeBron on this possession 👀pic.twitter.com/AMbvC7N1sq

The Thunder have announced that Chet Holmgren will miss the entire 2022-23 season due to the Lisfranc injury. The team’s GM Sam Presti said, “Certainly, we are disappointed for Chet, especially given the excitement he had about getting on the floor with his teammates this season. We know Chet has a long career ahead of him within our organization and the Oklahoma City community.”

Chet joins the likes of Joel Embiid and Ben Simmons to become the only few players to miss their rookie season due to injury. No one would want to miss their first-ever season on one of the biggest stages in the world. It is tragic and saddening to see such a young player not being able to put his talent and potential to good use.