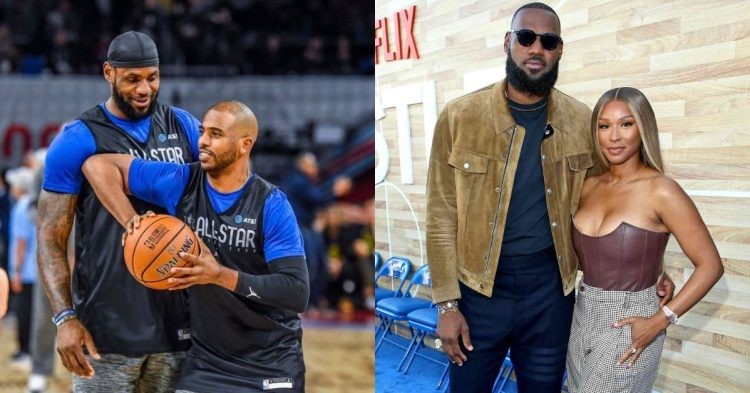 Kanye West has caught the world by surprise by coming out with some shocking revelations. Earlier today, Ye mentioned that Phoenix Suns star Chris Paul had an affair with his ex-wife and celebrity star Kim Kardashian. One would expect the news to spread like wildfire all around the world, but what’s unexpected is that 4x NBA champion LeBron James’ name is also involved.

For those who don’t know, LeBron and Chris have been good friends for a long time. Their friend group also includes the likes of Carmelo Anthony and Dwyane Wade.

NBA fans have circled the LA Lakers star with rumors of Savannah James suspected the NBA icon of cheating. One has tweeted, “I can’t lie savannah James got to ask LeBron to get a new set of friends. Wade, Melo, CP3 all of them stepped out on their significant other.” For context, there have been many rumors of Wade and Anthony cheating on their respective partners in the past.

I can’t lie savannah James got to ask lebron to get a new set of friends. Wade, melo, CP3 all of them stepped out on their significant other

Lebron saying his goodbyes to Dwade, Melo and Chris Paul after Savannah saying you can’t hangout with them nomore. pic.twitter.com/GC3Gz00NmP

The NBA world is claiming that Savannah James would not be happy with the fact that her husband is friends with an alleged cheater. One fan tweeted a video of LeBron fist bumping with other NBA players during a game before leaving.

The fan implies that James’ friendship with Paul will end soon, as Savannah would have wanted. The Lakers star has been accused of cheating in the past, by Sofia Franklyn. She claimed that LeBron requires people to sign an NDA before cheating on Savannah.

Wait till the news come out about Lebron cheating on Savannah.

“I told Savannah after the game ended that I didn’t like the way Chris looked at Kim… I knew craziness was about to happen. I told her to let Jada know.” pic.twitter.com/goOCfmQ9yI

It seems like the “LeLiar” memes are coming back to life. Many fans hilariously claim that LeBron would have told Savannah that he predicted CP3’s affair with Kim. For those who don’t know, the LeLiar memes recently lit the internet on fire after fans caught King James lying on multiple occasions.

Y’all gon be sick when the truth comes to the light in the future 😂 https://t.co/4umuCWRc3V

It seems like fans genuinely believe that LeBron might be the next one. A fan said, “If you truly believe that LeBron James has been with Savannah for 21 years and has never cheated then you must be an adult who still believes in Santa.” There have been no official reports of LeBron cheating on Savannah since they tied the knot in 2013. If it comes up, it would surely be shocking to find out.