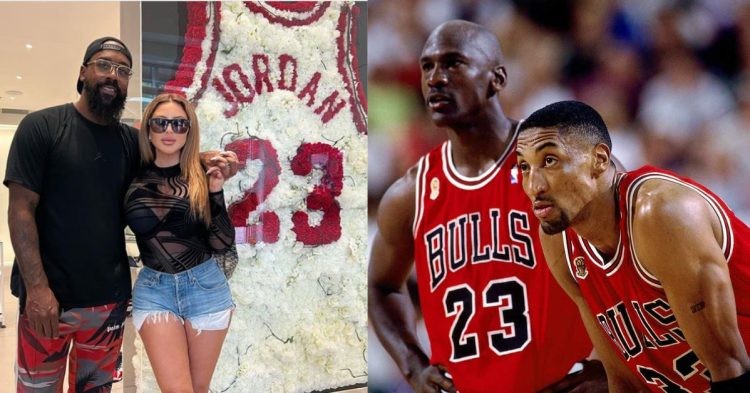 Larsa Pippen with Marcus Jordan and Michael Jordan with Scottie Pippen on the court (Credit: Instagram)

NBA fans were pleasantly surprised to find out that Larsa Pippen and Marcus Jordan were in a relationship. As some fans might certainly be aware, Marcus Jordan is one of the sons of Chicago Bulls legend Michael Jordan. On the other hand, Larsa is Scottie Pippen‘s ex-wife.

Considering that both Marcus and Larsa are connected to very influential NBA stars, this has generated quite a lot of publicity from the media. Fans must certainly want to know more about Larsa Pippen and her new relationship.

Larsa Pippen was married to Scottie Pippen for 24 years

Sometimes, even the most long-lasting marriages come to a sudden end. Some of us had heard about Larsa as she was married to Scottie Pippen. In fact, her son Scottie Pippen Jr is also trying to make it as a professional NBA player.

Her marriage came to an end on 15th December 2021 after she made claims that Scottie was abusive and punished her multiple time throughout the relationship. Especially if things didn’t go his way. In any case, the divorce was quite messy as the couple had 3 other children together, not including Scottie Pippen Jr.


Now that more than two years have passed since her relationship with Scottie ended, Larsa Pippen has decided to date a much younger Marcus Jordan. Considering that she is 48 years old and he is only 32, some have used that as a reason to criticize her.

Much like his father, Marcus Jordan is also a basketball player. He played college-level basketball for the UCF Knights men’s basketball team. Unfortunately, he was never good enough to take his talents all the way to the NBA as Michael Jordan did. Nonetheless, his name alone holds tremendous value and draws attention from normal people.

Perhaps that played a role in her holding off on making the relationship public. However, she must have changed her mind as she posted a picture on Instagram with Marcus Jordan. They were posing behind a giant floral arrangement showing Jordan’s #23 jersey. She also included the caption “Checks over Stripes“.

Some of the more musically oriented NBA fans will know that this is a reference to a verse that Drake sings in “Sicko Mode“. A fair number of fans also used this opportunity to congratulate the couple. We hope that they are able to have a happy relationship together.