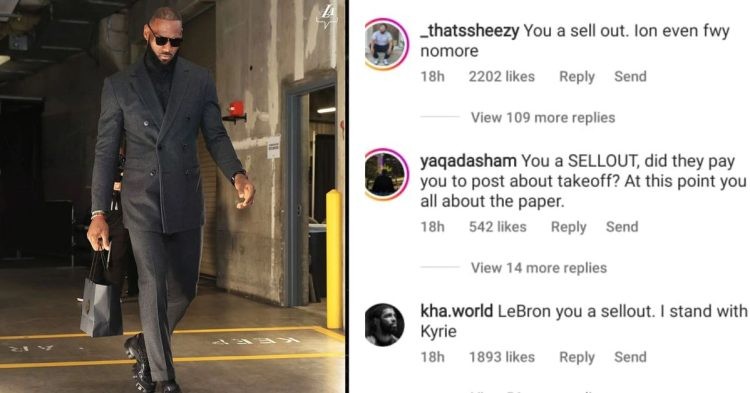 LeBron James is well-known as both an NBA player and a global personality. He has been the face of basketball for several years now. Nonetheless, King James has his fair share of critics and haters, who always look to slander him in some form. Mostly through relatively “safe” mediums like social media.

The 4x NBA champion recently made a post on Instagram sharing his condolences for the passing of American Rapper “Takeoff”. Despite the solemn nature of the post, there were several fans who took this chance to criticize him for his recent actions and make comparisons.

Fans criticize LeBron James for speaking out on the “wrong” issue

Most of us already know that James’ former teammate Kyrie Irving has been suspended for a minimum of 5 games due to his anti-Semitic behavior despiting sending out an apology. When LeBron was asked about this whole ordeal, he responded without mincing his words. King James said he didn’t respect Kyrie for what he did.

“I don’t condone any hate. To any kind, any race…What Kyrie did caused some harm to a lot of people…I don’t respect it.”

There is no justification for Irving posting the documentary. NBA fans felt LeBron was silent on the issues of Nike and slave labor in China. However, he was quick to speak out against Irving, a player who won one of the greatest NBA championships ever alongside LeBron.

This has drawn a plethora of criticism from people who are looking to slander the King. A fan said, “You a sellout, did they pay you to post about takeoff? at this point you all about the paper”.

“Free Muslims in China! You’re a sellout for sure” another said. “You talking about the wrong sh*t”, “Free Kyrie”. Some were more direct in their statements, “Aint have to do Kyrie like that. It’s expected though. We see how you rock with China for your sneakers.”

It is definitely wrong to compare evils and say one is greater than the other in some form or manner. However, we should also wonder whether these fans are completely unjustified in these comments. If indeed LeBron is critical of Kyrie and is a man supporting social justice, he should also stand against Nike publicly and make a statement. This is the point that these NBA fans appear to be making.